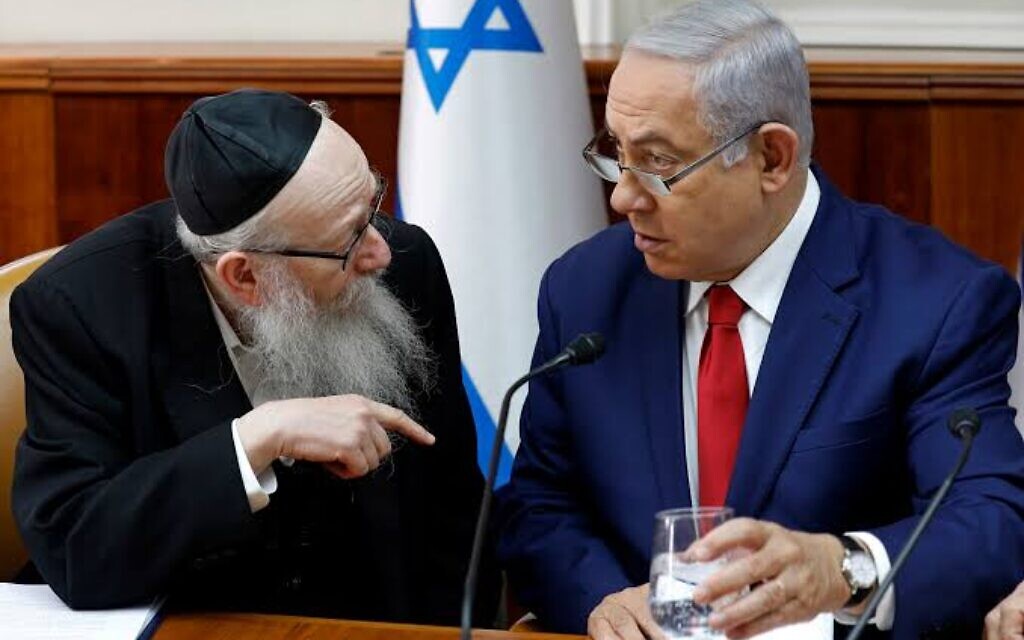 Benjamin Netanyahu, right, listens to Yaakov Litzman at the start of the the weekly cabinet meeting earlier this year in the prime minister's office in Jerusalem.

The extradition of Malka Leifer has brought together the Australian Jewish community more than any other single issue in the last few decades.

No matter where you sit on the political spectrum, most if not all Australian Jews want to see Leifer stand trial in Australia for 74 charges in relation to child sexual abuse.

Alleged victim Dassi Erlich often says she couldn’t continue her campaign for justice without the support of Federal Politicians from across the political divide and the public.

The failure to extradite Leifer, five years after she was first arrested in Israel, has been a source of frustration for many.

But over Shabbat, when Israeli Prime Minister Benjamin Netanyahu’s office announced it would ask the cabinet to approve the appointment of Yaakov Litzman as Health Minister, that frustration turned into rage, anger and disbelief.

Even those who are on team Bibi, so to speak, have to admit that this was a devastating blow to his credibility and integrity, and that of Israel.

While Netanyahu could go to court and fight accusations that he tried to bribe media organisations, there’s no court room for moral judgement. When you’re wrong… you’re just wrong.

Litzman, for those who haven’t been following the Leifer story, is the man accused of helping Leifer evade justice.

In August Israeli police recommended indicting him on fraud and breach of trust for allegedly interfering in the extradition of Leifer.

Police said that they found sufficient evidence to charge Litzman with trying to influence the opinion of psychiatrists appointed by the Ministry of Health in order to aid Leifer and prevent her extradition.

Police said that he attempted to pressure the Jerusalem district psychiatrist into falsely stating that Leifer was mentally unfit to be extradited to Australia to stand trial.

Litzman’s meeting with the key witness in the extradition case could also constitute obstruction of justice and he is accused of threatening other medical professionals at the ministry if they did not write reports in a way favourable to Leifer.

Appointing that man as health minister makes a mockery of Israel, is a slap in the face to Leifer’s alleged victims and should be a warning sign to all Australian Jews.

The Israel we are so proud of, and hold so dearly in our hearts, is being harmed.

Netanyahu is so desperate to cling onto power that he is actively helping a man who allegedly helps an alleged child sexual abuser evade justice.

The Royal Commission into Institutional Responses to Child Sexual Abuse often referred to the culture of abuse, and the failure of leaders that enables abuse to take place.

Netanyahu now falls into the category as one of those leaders.

Australian politicians often talk about the need for more action on Leifer, and they genuinely believe that Israel takes this matter seriously.

“I left those meetings comforted by the fact that they understand the seriousness of the issue for Australia and they know we have a strong commitment to seeing this resolved,” Porter said.

One has to ask now if Porter is right. Does the Israeli government really care about its relationships with Australia or the alleged victims? And is there anything that Netanyahu won’t do to cling onto power?

This decision is a low point for Netanyahu and Australia’s relationship with Israel.

Joshua Levi is the CEO of The AJN.