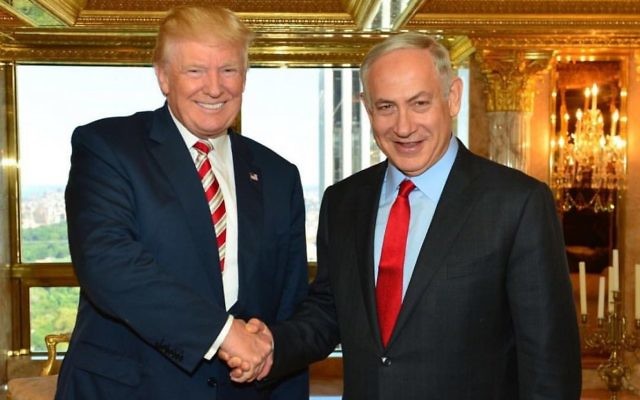 Already in hot water over his support for Donald Trump, Benjamin Netanyahu has confirmed his White House visit for February 15.

Israel’s Prime Minister said on Monday that he is keen to accept the Trump invite and looks forward to “discussing with him the areas of cooperation between us that are so vital to the security and wellbeing of our two countries”.

He’s expected to talk about military aid, to see how much settlement expansion he can get Trump to support, and to discuss plans to relocate the US embassy from Tel Aviv to Jerusalem.

Trump is likely to question Netanyahu on the bill to retroactively legalise outposts built on privately owned Palestinian land. This controversial legislation passed its final committee reading on Tuesday, and is expected to easily pass a final vote unless Trump demands that Netanyahu derail it.

The top item on the agenda is expected to be Iran, with Netanyahu and Trump angry that the Islamic republic tested a ballistic missile on Monday.

Netanyahu’s office says that his Washington trip won’t interfere with his travel plans to Australia later in the month.

As he prepares to travel, Netanyahu is dealing with headaches at home and abroad. Mexico is furious that he appears to have come out in support of Trump’s wall on its border with the US.

“President Trump is right,” Netanyahu tweeted, as America was abuzz with discussion of the planned wall. “I built a wall along Israel’s southern border. It stopped all illegal immigration. Great success. Great idea.”

Mexico’s Foreign Ministry was quick to react, expressing “profound astonishment, rejection and disappointment”, and saying that as a friend of Israel, it should be treated differently.

Netanyahu claimed that he had not actually been referring to Trump’s plans, just acknowledging Trump’s praise for Israel’s security structures. Trump had told Fox News: “A wall protects. All you have to do is ask Israel. They were having a total disaster coming across and they had a wall. It’s 99.9 per cent stoppage.”

The Israeli Foreign Ministry, which is headed by Netanyahu, got its representatives to defend him, and a spokeswoman said that he “referred to our specific security experience which we are willing to share. We do not express a position on US-Mexico relations.”

Tensions between Mexico and Israel spiralled so much that late on Tuesday Israel’s President Reuven Rivlin phoned Mexican President Enrique Peña Nieto to try to smooth things over. “I am sure that nobody intended to compare between the situation of Israel, and the situation of Mexico – rather this was a misunderstanding,” said Rivlin, emphasising the two countries’ strong ties.

Peña Nieto said the bilateral friendship will continue, but didn’t drop his complaints. “I do want to tell you that Mexico is more than willing to maintain this mutual cooperation,” he said. “Unfortunately this cooperation has been hurt because of this tweet.”

Netanyahu claimed that the whole controversy had been manufactured by Israel’s “left-wing” media.

Speaking at a Likud faction meeting he then launched into an attack on the press that was strong even for him. Echoing Trump, he accused his critics in the media of spreading “fake news”.

He hit out at left-wing media – a term he uses to apply to nearly all major media outlets apart from Israel Hayom – for being involved in a “bolshevik hunt”, attempts to brainwash the public and character-assassinate him and his family.

He wasn’t only talking about the Mexico controversy; Netanyahu is fuming at the media because he claims it propels investigations against him. Police detectives questioned him for a third time last Friday, as part of their probe into alleged corruption. They are thought to be building cases alleging that he allegedly took high-value gifts from wealthy businessmen, and allegedly tried to cut a deal for better coverage in the Yediot Ahronot newspaper in return for legislation that would have boosted its profits.

Netanyahu said at the Likud meeting that the media is pressuring law enforcement bodies to indict him “at any cost”. His speech followed a question time in Knesset that he used to claim that he’s subject to “persecution”, and Facebook posts decrying the media and political opponents. In one post he claimed that there’s an “undemocratic” attempt to remove him from power.

Israel’s Prime Minister will be in more agreeable spirits when he travels to Washington. Trump already made him a top priority in his first phone calls from the Oval Office, and apparently gave him the nod to announce major settlement construction plans.

It’s thought unlikely that the meeting will result in any clear decision about if and when the US embassy will move. There may, however, be some serious talk on Iran, a country that alarms both men, and is being given sanctions relief by a nuclear deal with the West that both have criticised. After Iran’s missile test on Monday, Netanyahu stated: “This is a flagrant violation of a UN Security Council resolution. At my upcoming meeting with President Trump in Washington, I intend to raise the renewal of sanctions against Iran in this context and in other contexts. Iranian aggression must not go unanswered.”