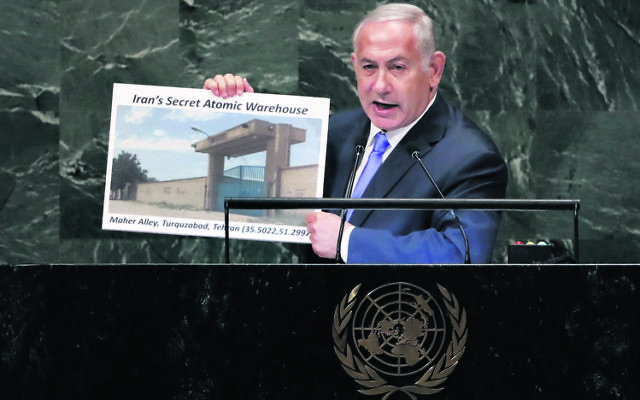 Presenting diagrams, maps and even coordinates of the warehouse, Netanyahu accused Europe of “appeasing” Iran.

“The reason Iran didn’t destroy its atomic archive and its atomic warehouse is because it hasn’t abandoned its goal to develop nuclear weapons,” he added.

ECAJ co-CEO Peter Wertheim said it was disturbing that the International Atomic Energy Agency (IAEA), which has been monitoring Iran’s compliance with the nuclear deal (also known as the Joint Comprehensive Plan of Action, or JCPOA), has remained silent.

He added, “The ECAJ has from the outset respectfully disagreed with the Australian government regarding the effectiveness of the JCPOA.

“Rather than reforming the Iranian regime’s conduct, it has resulted in the regime increasing its belligerence abroad and suppression of basic human rights at home.

“It has done nothing to curb the regime’s long-term ambitions and plans to acquire a nuclear weapons capability.”

In an AJN interview last week, Prime Minister Scott Morrison questioned what the deal would be replaced with if abandoned and “if it makes things any safer”.

Other highlights of Netanyahu’s speech included taking a swipe at the UN itself for accusing Israel of ethnic cleansing, calling the charge “the same old antisemitism with a brand new face”, expressing gratitude for Israel’s new regional alliances and extending the olive branch to other neighbours including the Palestinians.

Palestinian Authority President Mahmoud Abbas in his speech threatened to reverse Palestinian recognition of Israel, said Israel’s “racist” Nation State Law “crossed all red lines” and claimed that the US had “reneged on all previous commitments and undermined the two-state solution”.

With one breath he said, “Peace is the only path. We don’t believe in terrorism and violence,” and with another paid tribute to “our hero martyrs”.

He declared: “Jerusalem is not for sale” and also blamed Hamas for the failure of the Palestinian unity deal.

Wertheim called it a “long and rambling address” that “rehashed all the tired old cliches”.

“Whether he was describing Palestinian relations with Israel, the US or even Hamas, Abbas blamed everybody but himself and his predecessors for the failures of those relationships and for the political dead end to which they have now led their people,” he said.

“Public self-criticism and acceptance of any degree of responsibility seem to be beyond the capacity of Palestinian leaders, and this failure alone puts authentic statehood beyond their reach for the foreseeable future.”

Australia/Israel & Jewish Affairs Council executive director Colin Rubenstein said Abbas’s speech “only re-emphasised that the elderly Abbas has lost any interest he once had in doing anything beyond robotically repeating the Palestinian position in international NGOs and clinging to power in the Palestinian Authority”.

He added that the “real take-out” from the two speeches was Netanyahu’s Iran revelations, not “Abbas’s repetition of the predictable slurs which have characterised his speeches of recent years”.

Zionist Federation of Australia president Danny Lamm said it was “shocking” that Abbas’s tribute to “our hero martyrs and prisoners of war” was met with a rousing applause from the audience.

“The martyrs and prisoners that he speaks of are murderers and terrorists,” he said. “He made these statements in a room full of world leaders and diplomats at the United Nations and was applauded for it. What a disgrace.”