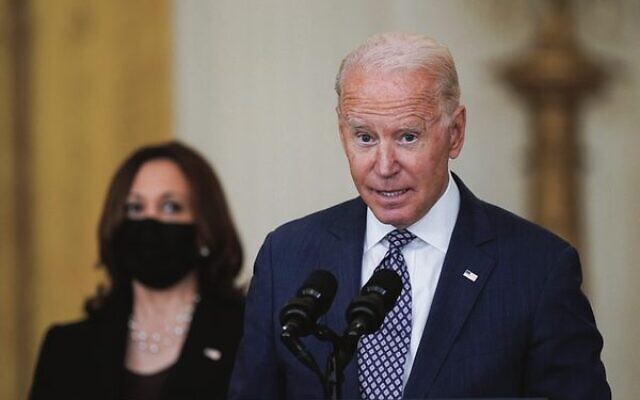 US President Joe Biden and Vice President Kamala Harris said that their administration is working to honour the memories of the victims of the 2018 Tree of Life synagogue shooting by recommitting to their efforts to combat antisemitism.

“We must always stand up and speak out against antisemitism with clarity and conviction, and rally against the forces of hate in all its forms, because silence is complicity,” Biden said in a lengthy statement marking three years since the most deadly antisemitic attack in US history.

Eleven worshippers were killed and seven others were injured when Robert Bowers burst into the shule in Pittsburg harmed with an AR-15 rifle and other weapons. 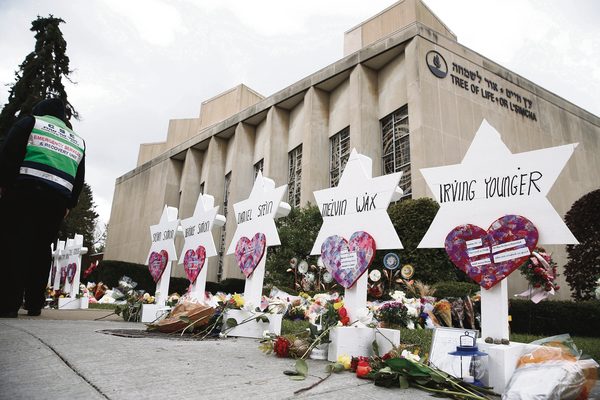 Honouring the victims of the Tree of Life shooting two days after the 2018 attack. Photo: EPA/Jared Wickerham

Three separate congregations – Tree of Life, Dor Hadash and New Light – were conducting services in different areas of the building when the attack happened.

“That day and those that followed remind all of us to embrace the better angels of our nature – and to turn pain into purpose,” said Biden.

“We must recognise in others our shared humanity and strive to summon unexpected faith in unanticipated moments – in the hope that we might heal and rebuild.

“That continues to be the work of my administration – laying out our country’s first-ever comprehensive strategy to address domestic terrorism, signing legislation aimed at strengthening our efforts to counter unlawful acts of hate, taking executive actions to protect houses of worship, and pressing forward with executive and legislative action to reduce all forms of gun violence.”

Last June, the White House introduced a strategy to combat domestic terrorism. It includes enhancing the government’s analysis of domestic terrorism and improving the information that is shared between local, state and federal law enforcement agencies. Administration officials say the Justice Department had also implemented a new system to “methodically track” domestic terrorism cases nationwide within the FBI.

On gun control, Biden has also been limited to a series of executive orders signed earlier this year, which expanded background checks required when purchasing certain weapons and tightened regulations on the sale of others. But more comprehensive reform will require legislation in Congress, which remains squarely divided on the issue.

Still, Biden and Harris focused on the actions they’ve managed to advance aimed at preventing the kind of tragedy that befell the Squirrel Hill community.

Biden “has taken executive action to protect houses of worship, and he has signed legislation to bolster our capacity to counter unlawful acts of hate,” said Harris in her respective statement.

“We stand in solidarity with the Squirrel Hill community and the entire Jewish community. We will never forget those lives that were taken. And we recommit to combat antisemitism wherever it exists.

“Today, we know that silence is not an option. More hate crimes were committed in the US last year than at any point in the last 20 years.”

Biden’s statement said: “This Shabbat, in synagogues around the country, worshipers will sing the timeless words from the Book of Proverbs: Eitz Chayim Hee La’machazikim Bah. ‘It is a tree of life for those who hold fast to it’.

“As we mark three years since this heinous attack, we resolve to remember the lives lost and commit to protecting a future worthy of their memories. May the survivors and the families of the victims hold fast to the teachings of their faith and find comfort in the embrace of their community and their country.”

Three years since the shooting, the trial for the shooter has yet to officially commence.

Bowers faces more than 60 federal charges, including hate crimes violations, obstruction of religious belief and the use of a firearm during a crime of violence. He has pleaded not guilty and faces a possible death penalty if convicted.

But the pandemic has caused delays and logistical challenges in the federal capital murder case against Bowers, a former truck driver whose statements that day and a trail of online posts suggest he was consumed by hatred for Jewish people when, authorities say, he launched the attack on the synagogue.