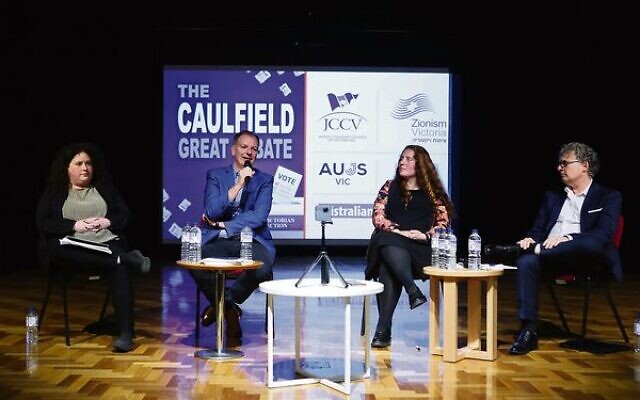 The potential relocation of Mount Scopus Memorial College, antisemitism on university campuses and the Israeli election were all hot topics at the Caulfield Great Debate, which took place at Glen Eira Town Hall last Thursday.

None of the four said that they had provided any firm commitments to Scopus on moving to the Caulfield Hospital site.

“There has to be a process and it all starts with that hospital site remaining a hospital site first and foremost before you do anything else,” Southwick said, noting the Liberals have committed $550 million for the redevelopment of Caulfield Hospital.

A parent of two children at Scopus, Harel said he understood the desire to bring the school “home to Caulfield”, but said there are “lots of conversations that need to happen”.

“There’s been no firm commitment to do anything other than have some conversations and consider stakeholder interests,” he said.

Kaltmann committed to look at redeveloping the site “as long as the hospital remains there”.

“That doesn’t mean the site goes to Scopus, and they clarified they want an open process … they would buy it at market value if it went to an open process, and that’s what they want,” she said.

Iampolski commented, “First and foremost, the hospital must be a priority and the site can and should be better used overall.”

In response to antisemitism and BDS motions on campuses, both Southwick and Harel called for universities to adopt the International Holocaust Remembrance Alliance (IHRA) definition of antisemitism.

Iampolski said she would push for stronger anti-racism and anti-vilification laws. She said she was not “anti-Israel” or “anti-Zionist”, and that the Greens do not have an official position on IHRA.

She added, “As a party we do not endorse BDS, but we are also not in a position to tell an independent union or body what they can and can’t endorse.”

Kaltmann noted, “I think IHRA is an amazing definition and it’s helpful for understanding when antisemitism or criticism of Israel crosses that line.

“If we strengthen the Racial and Religious Tolerance Act we have the ability to have legislative options for students that are going to bear the brunt of this antisemitic rhetoric as anti-Israel positions continue to become mainstreamed.”

Commenting on the Israeli election, Southwick said he doesn’t “interfere in Israel’s politics” and “Israel still exists regardless of what government is in power.”

Regarding the recent federal reversal on west Jerusalem, he said his “would be the last party to tell Israel where they should put their capital”.

Harel said, “I care very deeply about Israel … I think of Israel and Israelis like family. You love your family… [but] just because occasionally we disagree doesn’t mean that love goes away.”

But he added he was “very disappointed” with the Jerusalem decision, saying, “I think a sovereign state has the right to choose its own capital.”

Kaltmann said she didn’t have a problem in advocating for Israel.

“We know that it crosses over very quickly from legitimate criticism of Israel into antisemitism, but it’s okay to let your friends know that some positions are unacceptable,” she said.

Iampolski said she was concerned by the rise of any right-wing government in Israel or “anywhere in the world”.

Things became heated when Harel accused Southwick of hiding from the Liberal brand on his posters, and when Southwick claimed Harel was taking voters for granted by assuming Labor will win the election. Harel had argued that since polls are favouring Labor, a Caulfield representative with a “seat at the table” in government is more likely to get “real outcomes”.

Another issue of concern was the Liberals’ plan for protections for faith-based schools to hire staff with the same religious values. Southwick said this would not impact the LGBTIQ+ community, but the others disagreed.

Kaltmann also suggested the Liberals could “bring back the potential criminalisation of abortion”, which Southwick called “absolute scaremongering”.

All the candidates committed to act on climate change and supported initiatives to improve Victoria’s health system. The Liberals have pledged to divert $34.5 billion from the rail project to the health system.

Harel blamed the pandemic for Victoria’s “health crisis”, but Southwick said Premier Daniel Andrews had been leader and health minister long before it and was therefore responsible.