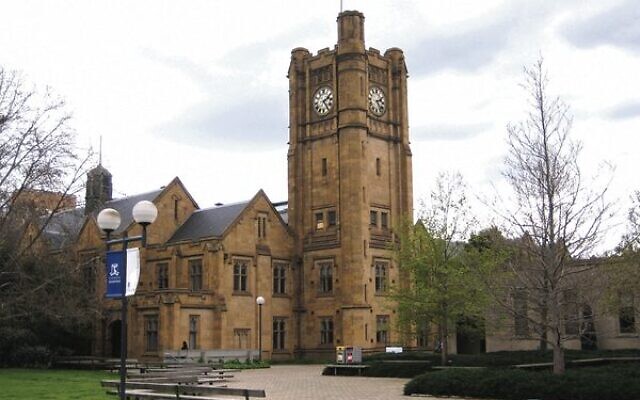 Under threat of legal action, the University of Melbourne Student Union (UMSU) has rescinded a motion that was labelled “blatantly antisemitic” when it passed in late April.

The April 29 motion “UMSU stands with Palestine – BDS and Solidarity Policy” called Israel a “settler colonial apartheid state”, accused it of “massacres, forced expulsion and ethnic cleansing of Palestinians”, called Zionism “a racist, colonial ideology” and tacitly endorsed terrorism in supporting the right of Palestinians “to engage in self defence against their occupiers”.

It also stated that “Judaism or Zionism are not to be conflated”.

After non-Jewish student Justin Riazaty launched legal action against UMSU last month – alleging the motion was in violation of the Associations Incorporation Reform Act 2012, and the Racial and Religious Tolerance Act 2001 – a rescission motion was moved last Thursday.

“Council is committed to a voice on the Palestinian cause. However, due to the desire for UMSU’s funds to not be unnecessarily spent on defending legal proceedings and to ensure that motions are robust, passed with due diligence and with regard to the interests of members, Council proposes to rescind and amend the motion,” UMSU said.

UMSU will now undertake a consultation process and establish a working group to develop a new motion.

The Australasian Union of Jewish Students (AUJS), who met with UMSU a number of times regarding the motion, welcomed the decision.

“The original UMSU motion was put forward over the objections of Jewish students. UMSU attempted to define Judaism, Zionism and antisemitism in a way that solely reflects the views of a fringe group of Israel-haters but bears no relationship to the lived experience of the Jewish people,” AUJS said in a statement.

“Universities and their student representative bodies should be places for well-informed, nuanced and open dialogue rather than hectoring polemics.

“They deserve our utmost support and Zionism Victoria will do all it can to assist them in combating such egregious motions when they surface,” he said.

“The resolution was odious and racist, and should never have been passed,” he said.

“We sincerely hope their reason for doing so is because they’ve recognised how bigoted the motion was, and not just because a student threatened legal action.

“To describe Zionism as racism is a racist attempt to deny Jews the right to their own identity … If any ethnicity other than Jews were singled out, the very students passing these resolutions would be up in arms in protest.”

Executive Council of Australian Jewry co-CEO Peter Wertheim lamented that “it seems that only the threat of legal action” persuaded UMSU to rescind their earlier resolution, together with the condemnation of that resolution as “antisemitic” by the university administration.

“Reason and principle were not enough,” he said.

“Beyond the immediate issue, this whole affair has thrown into sharp relief some disturbing features of contemporary campus life. The lack of interest of most students in electing those who are supposed to represent them has allowed fringe groups on the far left to fill the vacuum,” he continued.

“This has helped contemporary forms of antisemitism from the ‘progressive’ side of politics to flourish. Rolling back the tide will take a long time, but at least a beginning has now been made.”

“We hope UMSU does genuinely consult, and learn from its mistakes, and that any further motion reflects the standards we would expect from an institution of higher learning,” he said.