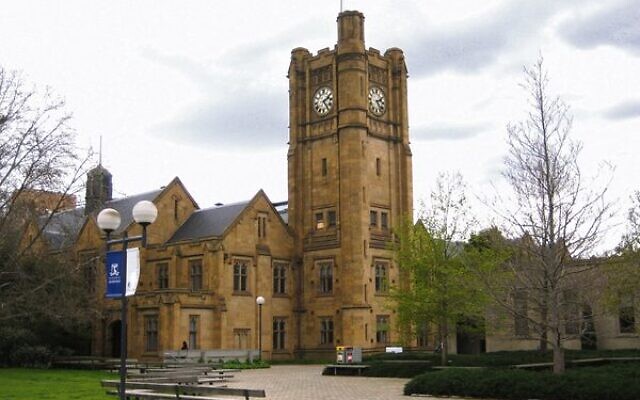 The University of Melbourne Student Union (UMSU) has rescinded a motion that was labelled “blatantly antisemitic” when it passed in late April.

The motion, titled “UMSU stands with Palestine – BDS and Solidarity Policy”, called Israel a “settler colonial apartheid state”, accused it of “massacres, forced expulsion and ethnic cleansing of Palestinians”, called Zionism “a racist, colonial ideology” and tacitly endorsed terrorism in supporting the right of Palestinians “to engage in self defence against their occupiers”.

It also stated that “Judaism or Zionism are not to be conflated”.

The Australasian Union of Jewish Students (AUJS) said on Thursday that UMSU decided to rescind it “after countless meetings between AUJS and UMSU and after the legal action taken by Melbourne University student Justin Riazaty against UMSU for racial discrimination”.

“The original UMSU motion was put forward over the objections of Jewish students. UMSU attempted to define Judaism, Zionism and antisemitism in a way that solely reflects the views of a fringe group of Israel-haters but bears no relationship to the lived experience of the Jewish people.”

AUJS said the recent move by the ANU Students Association to support the now-rescinded UMSU resolution made it evident that it “blindly followed virtue-signalling rather than consultation”.

“AUJS calls on UMSU and other student unions to ensure that unions represent the viewpoints of all students. Universities and their student representative bodies should be places for well-informed, nuanced and open dialogue rather than hectoring polemics,” AUJS continued.

Jewish communal roof bodies – who were united in their condemnation of the motion when it passed 10-7 on April 29 – also welcomed its rescinding.

Jewish Community Council of Victoria president Daniel Aghion congratulated AUJS on “its successful work” in achieving the outcome. “The resolution was odious and racist, and should never have been passed,” he said.

Zionist Federation of Australia president Jeremy Leibler said, “Rescinding the motion is an excellent first step to help heal the wounds the student union caused. We sincerely hope their reason for doing so is because they’ve recognised how bigoted the motion was, and not just because a student threatened legal action.”

However, Leibler expressed concern over the effect of the original motion and the efforts by student unions at other universities to express ‘solidarity’.

“To describe these motions as merely ‘criticising Israel’ is completely disingenuous. These motions redefine Judaism and call for Jews—and Jews alone—to be denied the right to self-determination. For those reasons, these motions are antisemitic and should be condemned,” he said.

“These student unionists appear unaware or uncaring about the devastating impact their motions are having on Jewish wellbeing on campus. To describe Zionism as racism is a racist attempt to deny Jews the right to their own identity. It is extraordinary that in modern Australia one ethnicity is singled out and excluded. If any ethnicity other than Jews were singled out, the very students passing these resolutions would be up in arms in protest.”

“Jewish students are on the frontline of the rising tide of antisemitism, and the community should be proud of the incredible work they and their leadership do. They deserve our utmost support and Zionism Victoria will do all it can to assist them in combatting such egregious motions when they surface.

“As AUJS says of this afternoon’s vote, this is an important step to ensuring that dialogue on campus is productive, nuanced and encourages understanding.”