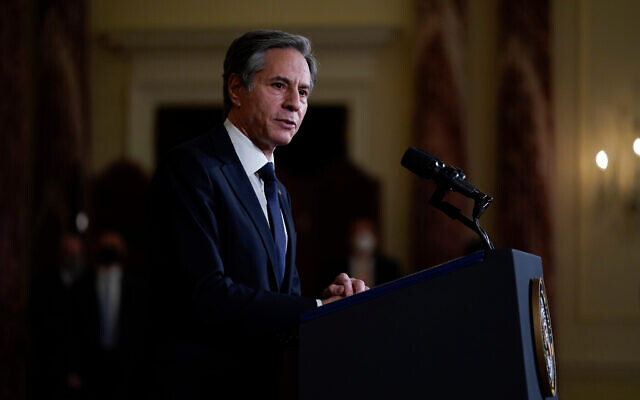 US Secretary of State Antony Blinken, who is Jewish, is in Melbourne today (Thursday) for a meeting of the Quad, a strategic security dialogue between the United States, India, Japan and Australia, and to meet Foreign Minister Marise Payne.

However, arriving in Australia yesterday, Blinken, the most senior member of President Joe Biden’s administration to visit Australia, will have wistful memories of a special connection that Melbourne holds for his family.

It’s the city that nurtured his late stepfather Dr Samuel Pisar as a young refugee after he survived the Holocaust.

Orphaned and virtually alone in Europe after his liberation from Auschwitz, Polish-born Pisar, who lost his parents and his sister to the Nazis, was sent to Australia by an aunt, where he came under the care of two uncles of his in Melbourne, who had immigrated to Australia in the 1930s.

Living at Studley Park and studying at the George Taylor College, Pisar later embarked on law studies at the University of Melbourne, where his aptitudes soon came to the attention of Law School dean Zelman (later Sir Zelman) Cowen, who helped the young honours law student further his studies at Harvard University.

Pisar’s Harvard doctoral thesis on the legal framework for trade relations between eastern Europe, the Soviet Union and China was controversial but caught the eye of John F. Kennedy.

Then a senator, Kennedy appointed Pisar as an adviser after he became president, and adopted his ideas on liberalised trade at the height of the Cold War.

“Given where I’d come from, to watch the President [JFK] make a TV policy statement which I had helped to draft was unreal, to the say the least,” reflected Pisar, during an exclusive hour-long face-to-face interview with The AJN in 2007.

In Melbourne to reunite with Sir Zelman, Pisar exclaimed that Australia “redeemed me morally and intellectually after an adolescence spent in the infernos of Europe”.

After JFK’s assassination, Pisar built up a legal practice that included a who’s who of A-listers as clients, ranging from Hollywood star Elizabeth Taylor to Apple founder Steve Jobs. He became a confidant of Golda Meir, Shimon Peres and Kerry Packer.

A key speech he gave in Kiev, Ukraine on east-west trade in 1971 was said to have influenced the US Congress to tie trade with the Soviets to an easing of emigration for Soviet Jews. Pisar gave the address after Meir, then Israel’s prime minister, had urged him to become involved in the struggle to free Soviet Jewry.

Pisar spoke glowingly to The AJN of his stepson Antony Blinken, son of his wife Judith, who at the time was serving as the Democratic staff director of the Senate Foreign Relations Committee. Blinken would later become national security adviser to Biden as vice-president.

But Pisar, who died in 2015, did not live to see Blinken become Secretary of State, an appointment made by Biden after he won the 2020 election.
On Pisar passing, Biden had stated, “Samuel’s spirit of public service and his dedication to community live on in his children. We have seen it in Tony’s service to our nation, and his friendship to our family.”

Biden said Pisar’s memoir Of Blood And Hope “stands as a strong reminder for every generation of our ongoing obligations to never forget, a lesson I have imparted to my children and grandchildren by taking them to Dachau and Auschwitz.”

Blinken had told The Times of Israel, “One of the things that’s really shaped the vice-president [Biden]’s … career-long support for Israel and its security is the lesson of the Holocaust. He believes strongly that a secure Jewish homeland in Israel is the single best guarantee to ensure that never again will the Jewish people be threatened with destruction.”

At the time of Blinken’s nomination, Michael Oren, a former Israeli ambassador to the US, described him as “a great diplomat and a true friend of Israel”.