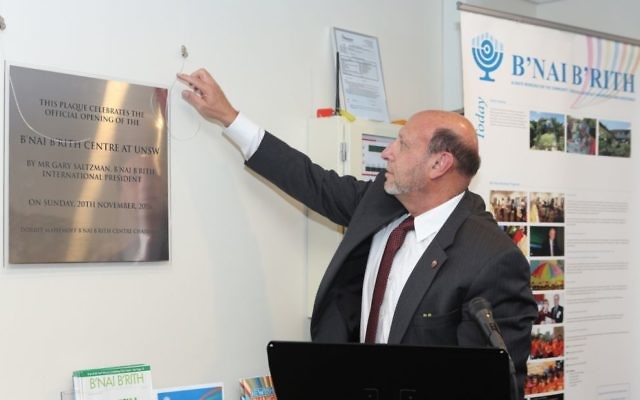 IT’S been a momentous month for the NSW branch of B’nai B’rith.

Last Sunday, the organisation’s new headquarters at Shalom College were officially opened by B’nai B’rith International’s president Gary Saltzman, who was guest speaker at the annual dinner that night.

B’nai B’rith NSW president Anna Marks told The AJN, “The new facilities are fantastic – the boardroom can accommodate up to 50 people and the auditorium can seat about 200. It will serve us really well for the future.”

Meanwhile, the 2016 B’nai B’rith Oration – facilitated by the Alfred Dreyfus Unit – was held at Emanuel Synagogue on November 16.

Around 120 people enjoyed a panel discussion, moderated by Macquarie University’s Professor Lucy Taksa, which explored ways in which Australia and Israel are fostering innovation in the 21st century.

Langdale said the fact that Israel is in a tough neighbourhood has necessitated that it becomes a leader in innovation and high-tech industries – “otherwise it faces a serious challenge to is own security and existence”.

“The experience Israel has in cybersecurity, for example, puts it in great stead to lead from the front,” he said.

But he said the start-up nation still has challenges it needs to address, such as a brain drain to the USA and Europe and “a temptation to take the money [from selling start-ups] and run, and there’s been a lot of recent discussions in Israel about how to address that”.

Nightingale hailed “Israel’s entrepreneurial embrace of ‘chutzpah’ and government policies it has introduced, including tax incentives and support for young entrepreneurs and -start-ups, and a clear strategy of developing high-tech clusters in major regional centres like Beersheba”.