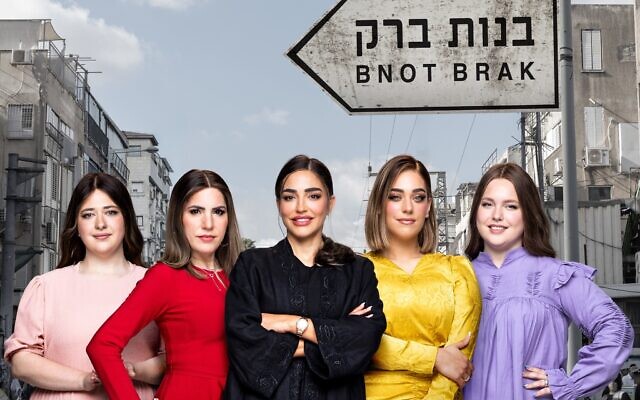 Most of Simi Hershkop’s family has no idea she is starring in a new Israeli TV series.

Neither her father nor her 11 siblings use social media or have access to the internet. And due to their strained relations, she did not tell them about the cameras that have been following her around for months as part of a new HOT docu-reality show about Haredi women.

“They don’t really have any internet access. Maybe some of them know, some of them don’t, but we haven’t spoken about it,” Hershkop, 27, told The Times of Israel. “I think most of them probably don’t know; they’re not part of that world. And we’re not so in touch… They had a hard time with the path I chose and I fully respect that.”

Her path keeps her firmly inside the Haredi world, wearing a wig and modest clothes, sending her son to an ultra-Orthodox school and of course observing Shabbat and keeping kosher.

But Hershkop – one of the five women starring in Bnot Brak – is not only the proud owner of a smartphone, but she also runs the popular DosCelebs Instagram account, which highlights the intersection of religion and pop culture to its more than 70,000 followers.

Hershkop – who grew up in Bnei Brak and now lives just outside Jerusalem – is joined on the show by Yael Silverman, a wigmaker; Esti Socolovski, a makeup artist; Ofra Shimoni, a businesswoman and media mogul; and Nana Halperin, a member of the wealthy and well-known Halperin family who used to run her own accessories line.

The five women who star in Bnot Brak – a feminine play on the name of Bnei Brak, the largest Haredi city in Israel – represent a new kind of ultra-Orthodox woman: one who doesn’t hide owning a smartphone, has an active social media presence, dresses fashionably and isn’t afraid to speak her mind.

Despite all they have in common, the five women are still remarkably different in their perspectives, backgrounds and points of view. Shimoni views her time on social media as a necessary evil to promote her business, Halperin believes it is a tool to showcase the beauty of religion and Socolovski uses it to spotlight both her career and her personal life while building her brand.

“We’re very, very different from each other, the cast is very diverse, nobody is like each other in any way,” Silverman, 27, told The Times of Israel. “I’m happy because the general public doesn’t really know these different sides of the Haredi community.”

Silverman, one of the more outspoken members of the cast, grew up and still lives in Bnei Brak, where she makes and sells wigs, the traditional hair covering for married ultra-Orthodox women.

“From the outside, the Haredi community looks very homogeneous — that everyone is the same, dresses the same, thinks the same,” she said. “So I’m very happy to have this series to show that it’s very much not the case.”

While mainstream ultra-Orthodox Jews shun the use of smartphones in favour of the strictly limited ‘kosher phones’ that can only be used for phone calls, a growing number are owning and using internet-connected devices, to the dismay of leading Haredi rabbis.

Hershkop said she had to wait until she left her parents’ home to acquire the forbidden object.

“Until I got married I didn’t have a smartphone, and by the sheva brachot [the week of celebrations following a Jewish wedding] I already had a smartphone,” she recalled, noting that she also kept a ‘kosher’ phone for public use and initially only used the smartphone in private.

While the women on Bnot Brak all define themselves as Haredi, the most common criticism they receive is that they should not be allowed to refer to themselves as part of the ultra-Orthodox world.

“People have a very clear idea of what a Haredi person is, and then I speak in ways that don’t fit that model, so they say ‘no, you’re not Haredi,’” said Silverman. “I get that reaction all the time, but it doesn’t bother me. Today what is important to me is what I think about myself.”

Silverman admits that she is more modern than many ultra-Orthodox Jews, but “I’m part of the Haredi community. I’m a bit more of an outsider, but there are others like me, and not just a few.”

Hershkop said she receives similar criticism on a regular basis.

“Nobody else can decide who I am; only I get to decide that,” she said. “I live in a Haredi home. Perhaps I’m among the more modern ultra-Orthodox Jews, but I don’t fit into any box. I think I’m a good Jew and I’m trying to show good things, and nobody else gets to define me.”

Bringing the stories of women outside of mainstream Israeli culture to the general public is a welcome development. But Bnot Brak is still a very classic reality show, with obviously staged conversations and interactions and a heavy editing hand.

And while Halperin is an interesting character, her life might be more suited to a show on how Israel’s top 1% lives. With a home in Bnei Brak – one of the poorest cities in Israel – that contains both a private pool and her own in-house mikveh (as well as a luxury vacation home in Jerusalem), she’s hardly representative of any average Haredi woman.

Among the five women, Halperin holds perhaps the strictest ultra-Orthodox views, despite her embrace of certain elements of the outside world.

“My entire world view is very Haredi. I’m internally very extreme, maybe externally less so,” she said on the show.

In an interview with Channel 12 to promote the series, Halperin touched on one of the most culturally and politically divisive issues in the Haredi community – the teaching of core subjects like math, English, science and literature in schools.

“I’m against [teaching] the core subjects,” said Halperin, whose five sons attend or attended institutions where they study only Talmud and other holy subjects. While Haredi girls’ schools offer a somewhat more expansive education, the boys’ institutions generally teach no secular subjects.

Silverman, who sends her oldest daughter to a state-run Haredi school (a relatively new phenomenon), stands diametrically opposed to such a position.

“It seems illogical to me. I think the boys deserve to get a full education,” Silverman told The Times of Israel, noting that her husband grew up without studying any secular subjects, and once he entered the working world “he had to start learning to use a computer and other things that other people learn in fourth grade.”

Opposition to teaching such subjects, said Silverman, stems from those who want Haredi men to only study Torah full-time, even as adults. “But you have to give a child the option to choose if he wants to learn Torah or to study academics.”

Ultimately, the women involved say they want to show the world that not all Haredim are the same – and that in many ways, they have plenty in common with secular Israelis.

“The Haredi community and the secular public – we’re not that different,” said Hershkop. “Maybe we look different on the outside, but on the inside we’re all still humans, and we should stop judging each other.”

Hershkop said that though there are extremist Haredim, “we’re not all extreme and setting fire to trashcans [in anti-government protests]. There’s also the side that people don’t know. And it’s time to see the beautiful side of the religion, and we’re here to show that.”

Silverman said she hopes Bnot Brak will “disprove a lot of stigmas about Haredim, because there really hasn’t been a TV series that showed off daily Haredi life,” she said. “Until now it has been items on the news or protests and people see only a certain limited view of Haredim.”

With the new show, she said, “I’m very happy that we have an opportunity to show that we’re 1.5 million people, with plenty of diversity and differences.”