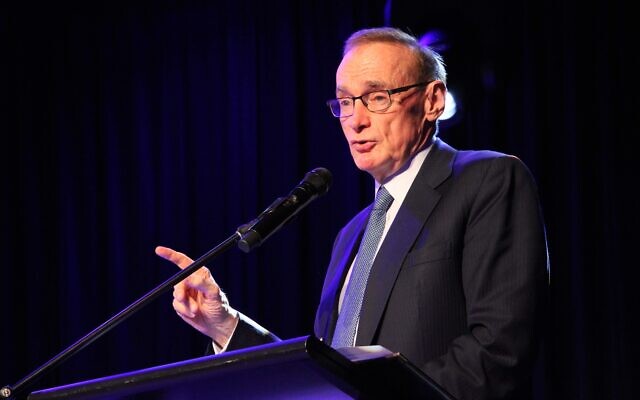 The email, sent on April 28 with the subject heading “State Conference Motions”, began with the words “APARTHEID … SETTLEMENT EXPANSION … HUMAN RIGHTS” and welcomed the recent federal Labor platform change supporting the recognition of a Palestinian state.

“To all supporters of Palestine in the Australian Labor Party,” he continued.

“Human Rights Watch says there is an overarching Israeli government policy to maintain domination by Jewish Israelis and ‘grave abuses’ against Palestinian (sic) living in the occupied territories.

“Australia should support the work of the International Criminal Court in investigating human rights abuses by the Israeli government … Human Rights Watch for the first time has used the word Apartheid to describe Israeli persecution of Palestinians with a report saying the country had crossed a vital threshold in this respect.”

Carr noted Labor’s Kogarah SEC had carried a motion to be put to September’s NSW conference calling on the next Labor government “to work with the European Union and the like-minded governments to apply bans to products produced in Israeli settlements, any investment or finance associated with settlements, given that all settlements are illegal at law and a barrier to a two State solution (sic)”.

“I was director of communications for Mr Carr when he was premier from 1995 to 2005 – but we have different views on foreign policy,” he added.

“Anthony Albanese has described boycotting Israel as ‘beyond the pale’ and ‘counterproductive self-indulgence’,” he said.

“Boycotting goods from the West Bank will jeopardise the livelihoods of the approximately 50,000 Palestinians who are employed in Israeli industries on the same pay and conditions as Israeli workers.

“It’s also relevant that Human Rights Watch is not a credible organisation on Israel-Palestine matters, and its description of Israel as an apartheid state is a baseless slur which trivialises the evils of the apartheid regime and those who suffered under it.

“But perhaps the most unfortunate aspect of this latest push is that it will do nothing to advance a state of Palestine.”

Zionist Council of New South Wales Israel affairs director Arsen Ostrovsky said Carr “seems to have a rather unhealthy obsession with Israel, dominated by his irrational hatred of the Jewish State and willingness to be a pawn of the Palestinian propaganda machine”.

“It is high time that the Labor Party, both federal and state, rein Carr in,” he said.

Macnamara MP Josh Burns said Carr’s accusations and those of Human Rights Watch “do not reflect the views of the Australian Labor Party and does not advance the cause of peace”.

“Add the twist of Beijing’s most odious advocate in Australia attempting to divert attention from China’s concentration camps in Xinjiang and its aggression against Hong Kong and Taiwan,” he said, adding it was “ironic that Carr whinges about the Palestinians not having a vote on the day PA boss Abbas cancels the Palestinian elections”.

Asked for a comment at a Victorian Parliamentary Yom Ha’atzmaut function, former federal Labor leader Bill Shorten said he had made it a practice not to comment about Carr’s comments, “Because you can be here all day.”