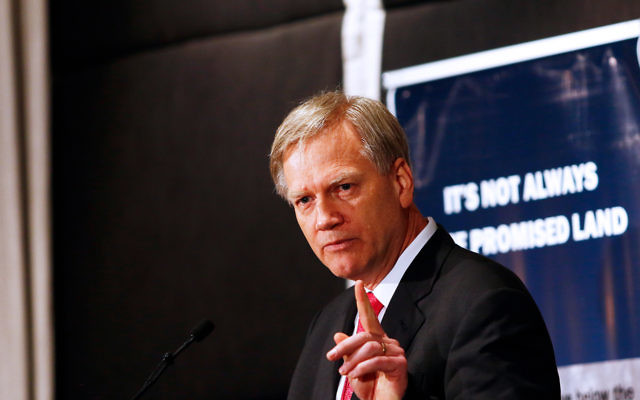 THE reaction to Julie Bishop’s invitation to Benjamin Netanyahu to visit Australia will indicate how the old paradigm that “the left is the friend of the Jewish people and the right is its enemy” is no longer true.

That was the message from News Corp columnist and Sky News host Andrew Bolt when he addressed more than 300 guests at a WIZO Victoria breakfast last Friday.

“Where are you most likely to hear the attacks on his [Netanyahu’s] visit coming from?” Bolt asked.

Describing “the new dialogue of the left” as “to divest, to ban, to shun debate, to demonise, not actually to discuss”, he foresaw “the usual protests and attempts at boycott” in response to Netanyahu’s visit, and recalled the incident at the University of Sydney last year when anti-Israel students stormed a talk by the pro-Israel Colonel Richard Kemp.

Noting that anti-Israel attitudes have now permeated the mainstream, Bolt cautioned against the Jewish community supporting multiculturalism. Noting, among other examples, former foreign minister Bob Carr’s criticism of the “Israel lobby” while ignoring the influence of other lobby groups, as well as Carr forcing then prime minister Julia Gillard to abstain from a vote for Palestinian observer status at the United Nations rather than oppose it, so as to shore up Muslim support in Sydney’s western suburbs, Bolt said, “When Labor changes foreign policy on the basis of how many votes it has in particular seats from one ethnic group and it’s not yours, you lose.”

While recognising that communal leaders may have once had good reason to support the idea of multiculturalism, he insisted, “The function of government is to think of what unites us not divides us into different tribes, because then it becomes a wrestle of one group over another for limited resources. And in that battle you lose, Jews lose.”

Bolt also urged community leaders to change their position on opposing changes to Section 18C of the Racial Discrimination Act, and support rather than restrict freedom of speech.

“If there’s one community in Australia that should reckon that if we have no laws against free speech that in any debate where free speech is allowed you will win, it has to be the Jewish community. Don’t you pride yourself on education, on the gifted scholars and gifted lecturers and the gifted speakers that you’ve produced? And you can’t win a debate without laws on free speech – that’s ridiculous.”

Urging the community to be “on the side of freedom”, Bolt stressed, “You can no longer rely on government, on MPs, being your friend. There’s a different calculus at work. Universities are pumping out more and more people from our arts faculties that don’t see Israel as a friend, don’t see Western culture which Israel has been such a tremendous contributor to, as something worth celebrating, and don’t see free speech as worth much at all.

“On all those fronts you lose. They’re pumping out more and more people who think we should be divided into tribes, and yours is one of the smallest.”

Asked who would be better for Israel, Donald Trump or Hillary Clinton, Bolt was reluctant to nail his colours to either mast. Noting that Clinton served as the current US President’s secretary of state, he asked rhetorically, “After eight years of Barack Obama is Israel more safe or less? Do you want more of the same?”

Turning to the Republican candidate, he said, “The question is this. Is Donald Trump an act? What is there behind that facade? He could actually be terrible … on the other hand, he could be great. The margin for error is there, but the margin for success is also there. You know that the potential is that Trump at his best will be far better than Hillary at her best.”

And in a final word on the forthcoming election, he concluded, “I suspect that he’ll be better than Hillary Clinton, but if there’s a big mushroom cloud over the Middle East in a few years, please forget what I said.”

Last Friday’s breakfast at the International of Brighton raised funds for Ahuzat Yeladim, a school in Haifa for children from troubled backgrounds, supported by WIZO Australia.

After watching a moving video about the youngsters whose lives are turned around by the care they receive with WIZO’s aid, Bolt said, “I’m proud I’m able in my way to help contribute to this event.

Noting that “the damage done [to the children] is forever unless a miracle occurs,” he stated, “hopefully a miracle is here.”