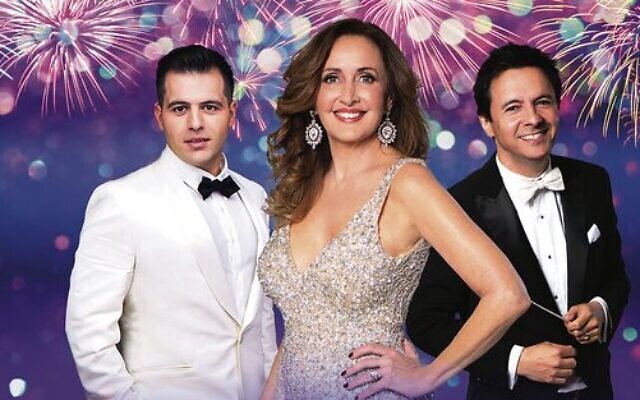 Musical director, event director, pianist and composer, plus a well-recognised face on Australian television, there’s not much John Foreman can’t do.

In fact, he’s the man behind many of the biggest events in Australian entertainment and when it comes to some of Australia’s most memorable musical moments, Foreman was at the forefront.

Take The Flame, performed by Tina Arena at the Sydney 2000 Olympics Opening Ceremony – yep, that was Foreman.

When Oprah Winfrey came to Australia, it was Foreman who musically directed her finale concert on the steps of the Sydney Opera House.

While he has worked with some of the most famous names around the world, Foreman’s big break came in 1992, when he met TV legend Bert Newton, who offered the rookie a job as his musical director on a new show he was working on – The Morning Show.

The pair became one of Australia’s most unlikely television partnerships.

Foreman told The AJN that Newton was “fascinated by people of all religions” and described the television great as down-to-earth, well-informed and a smart man. He said working with Newton was an “absolute highlight”.

“It was thrilling to watch Bert ad-lib his way through many hours of live television every week,” Foreman told The AJN.

“I remember one morning, Topol was a guest on Bert’s show. Like Cher or Madonna, Topol is one of those people who is known by just one name.

Since then, Foreman has enjoyed plenty of “pinch me” moments, including performing with Shirley Bassey and Reba McEntire.

But he said a highlight of his career to date has been meeting and working with Burt Bacharach for a television special.

“Burt was absolutely wonderful company and, as we all know, an incredible songwriter and musician,” he recalled. “It was a thrilling experience.”

Foreman grew up around the Jewish community in Newcastle and while he explains that these days, his connection to Judaism tends to be more cultural, he does admit that Jewish influences do find their way into his musical endeavours.

“I’ve just been listening to a great CD by The Klezmonauts entitled Oy to the World – Christmas carols played with a Klezmer flavour,” he said.

These days, among many other things, Foreman is the director of the Aussie Pops Orchestra which has been playing popular orchestral music for more than 40 years. From Bolero to the Beatles, Gershwin to Tchaikovsky, Strauss to Cole Porter or the haunting melodies of Andrew Lloyd-Webber, Aussie Pops excels in fusing the classic and the popular.

“It’s a fabulous group of musicians who have the ability to play everything from popular classics to Broadway hits, big band music, opera and everything in between,” Foreman explained. “Over the years, these amazing musicians have backed everyone from Victor Borge and Sir Harry Secombe to Dame Joan Sutherland and Olivia Newton-John.”

Foreman took the reins of the orchestra in 2019 and this year is once again at the helm of the can’t-miss-it New Year’s Eve gala concert.

The 60-piece orchestra will take to the stage at Hamer Hall, with Australia’s leading lady of song, Marina Prior, and fabulous tenor, Mark Vincent. According to Foreman, there will be more than 100 performers on stage, including Doug Heywood and the Camberwell Chorale plus the Dana Jolly Dancers.

Asked what audiences can expect from the concert, Foreman said it will bring the excitement of New Year’s Eve.

“The repertoire is fun, New Year’s Eve material – The Blue Danube, Singin’ in the Rain, Nessun Dorma, the Overture from Carmen, La Vie en Rose, even the Can Can – plenty of fun, popular music to celebrate the start of 2023,” he shared.

“Marina and Mark are both wonderful people and great performers,” Foreman continued. “They’re both fantastic as solo artists but together, their voices are incredible.”

Prior, who most recently added Violet Newstead in 9 to 5 to her long list of musical theatre roles, is one of Australia’s most well-known musical performers, with classic roles including Cosette and Fantine in Les Misérables to Christine in The Phantom of the Opera, Maria in West Side Story, and Magnolia in Show Boat.

Mark Vincent, who is known as the world’s youngest tenor, first appeared on television as a fresh-faced 15-year-old on Australia’s Got Talent in 2009 and has since seen nine consecutive albums reach #1 on the ARIA Classical Crossover charts. The tenor made his musical theatre debut in Dirty Dancing and then was hand-picked by Dame Julie Andrews to play Freddy Einsfeld Hill in My Fair Lady.

Both, as Foreman said, are incredible at what they do, but there’s some sort of magic that happens when they perform together.

For Aussie Pops, the gala concert really is the cream of their calendar crop.

“The New Year’s Eve gala concert is a really wonderful way to ring in the new year and it’s the highlight of our Aussie Pops calendar,” Foreman said.

There’s truly nothing better than bopping along with Pops to ring in 2023.

New Year’s Eve gala concert is at Hamer Hall with a 2pm matinee or 8pm concert, with the option of an afterparty ticket. For more, visit apoconcerts.com