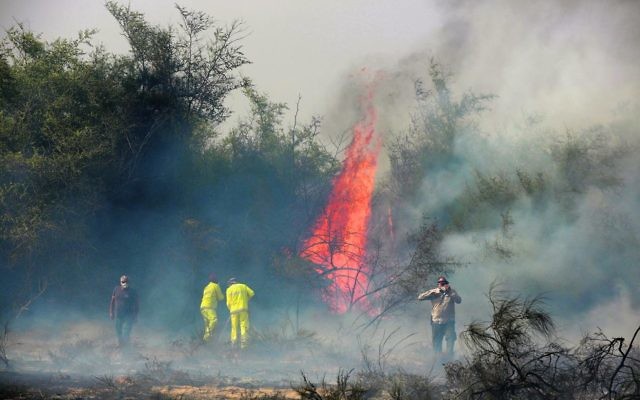 Israeli firefighters trying to extinguish a fire at the Carmia nature reserve last month, believed to have been ignited by a fire kite or balloon from Gaza. Photo: EPA/Abir Sultan

HAMAS officials have spent days in intense meetings considering a long-term ceasefire, prompting speculation that a deal is near.

After a turbulent four months involving violent demonstrations, hundreds of rockets and many terror kites, Israel is hoping that Hamas will calm the border if it agrees to ease restrictions on Gaza.

Egypt and a United Nations envoy have become heavily involved in trying to broker a deal, and are operating on the assumption that Israel wants quiet and Hamas wants to become more popular with Gazans by securing economic benefits.

But Israel is also bracing itself for intensified violence if ceasefire talks fail, and Defence Minister Avigdor Lieberman this week told civilians that the military will keep them safe. “Israel’s counterterrorism capabilities around Gaza are increasing every day,” Lieberman said.

He made the comments as he released pictures of a new sea barrier that is being built to protect Israel by attacks that come from Gaza by sea, at the same time as it builds an underground barrier to stop Hamas’ terror tunnels.

As the indirect negotiations took place this week, there was no respite on the border. On Tuesday, terrorists fired shots from a Hamas post towards IDF soldiers near the northern Gaza Strip. Israeli forces fired back, killing two Hamas gunmen.

A ship tried to break the naval blockade of Gaza on Saturday, prompting the Israeli navy to intercept it, and over recent days arson kites and balloons have continued to cross the border, and several times Israeli military fired towards launch squads.

The challenge of the fires became so intense that Israel accepted an offer from American firefighters to help out, and the US-based Emergency Volunteer Project flew out a delegation of 10 firefighters, sponsored by the Jewish Federations of North America.

Yuval Rotem, Director General of Israel’s Foreign Ministry, lauded the international solidarity against aerial arson. It was, he said, “heartwarming to see the work of these American firefighters, here to assist Israeli fire crews in putting out fires sparked by Hamas incendiary devices”.

The latest protests on the border, held last Friday, were also violent. Around 8,000 people gathered at five locations along the Gaza border, and there were several attempts to sabotage security infrastructure. One Palestinian protester was reported killed.

While Hamas may be prepared to put a stop to the violence as part of a ceasefire agreement, it is thought to be unwilling to give in to Israel’s demand to return Israelis, living and dead, who are in Gaza.

Hamas is holding the bodies of two soldiers who were killed in 2014, Oron Shaul and Hadar Goldin, as well as three or four living Israelis, who willingly crossed to Gaza, apparently because of mental illness.

The Shaul family declared in a letter to the Prime Minister and the Security Cabinet that ceasefire suggestions must be rejected unless they bring Israelis home. Otherwise, it “will not be worth the paper it’s written on” and “will all come back to us like a boomerang”.

The Goldin family has also been very vocal making this claim, with Hadar’s father Simcha saying that no new money should reach Gaza before the soldiers’ bodies are returned.

Ministers on the right are expected to be very reticent to make a deal that doesn’t involve the return of citizens – but some in Israel fear that the government is about to make a mistake by sticking to this ­principle.

Celine Touboul, steering committee member of the dovish Geneva Initiative, told The AJN that she thinks it is in the interest of both Gazans and Israelis to reach a ceasefire even if it doesn’t involve returning the Israelis.

“Israel should strive for the return of the bodies, but I don’t think the entire population of Gaza should be held hostage for this,” she said. “And if we [Israel] don’t find a resolution on Gaza, we will be going to war and people will be killed.”