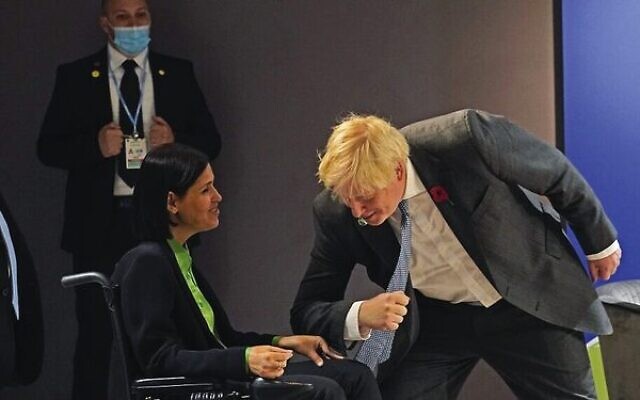 ISRAELI Energy Minister Karine Elharrar entered the COP26 climate conference alongside Prime Minister Naftali Bennett on Tuesday morning, a day after she was barred because it was inaccessible to people in wheelchairs.

After she got out of an accessible van, Bennett pointed at the blue ramp leading into the event. “Tomorrow, it will be exactly the same,” he promised. “Let’s go.”

“This is very important,” he said to her, gesturing toward the ramp.

At the start of his three-way meeting with Bennett and Elharrar in Glasgow on Tuesday, British Prime Minister Boris Johnson apologised for the incident.

He elbow-bumped Elharrar, said he was pleased to see her, and added, “I gather there was some confusion with the arrangements yesterday. I am very, very sorry about that.”

The fiasco of Elharrar’s exclusion was widely covered by British as well as Israeli press. Speaking on the BBC, UK Environment Secretary George Eustice said, “We deeply regret that incident.”

He added that there appeared to have been a miscommunication and organisers, unaware of Elharrar’s requirements, had not made the right arrangements at the particular entrance she was coming to.

For two hours on Monday, organisers refused to let Elharrar enter the large compound in the vehicle in which she arrived, Elharrar’s office said. They eventually offered a shuttle transport to the summit area, but the shuttle was not wheelchair accessible. She was forced to return to her hotel in Edinburgh.

“The only way they said I could come in was to walk on foot for almost a kilometre, or to board a shuttle that was not wheelchair accessible,” Elharrar told Channel 12 news.

“This is scandalous conduct and it shouldn’t have happened,” Elharrar told Ynet. “I came with certain goals and I couldn’t achieve them today.”

“The UN calls on everyone to adhere to the international treaty,” she said, presumable referring to the Convention on the Rights of Persons with Disabilities. “So it is appropriate for there to be accessibility at its events.”

Upon learning of the incident, Bennett phoned Elharrar and told her it was “unacceptable”. He said her vehicle would be part of his official convoy on Tuesday, thus ensuring her entry.

Foreign Minister Yair Lapid, who heads Elharrar’s Yesh Atid party, also weighed in. “It is impossible to take care of the future, the climate, and sustainability if we don’t first take care of people, accessibility and people with disabilities,” he said in a statement.

UK Ambassador to Israel Neil Wigan tweeted that he was “disturbed” by Elharrar’s exclusion. “I apologise deeply and sincerely to the minister. We want a COP summit that is welcoming and inclusive to everyone,” said Wigan.