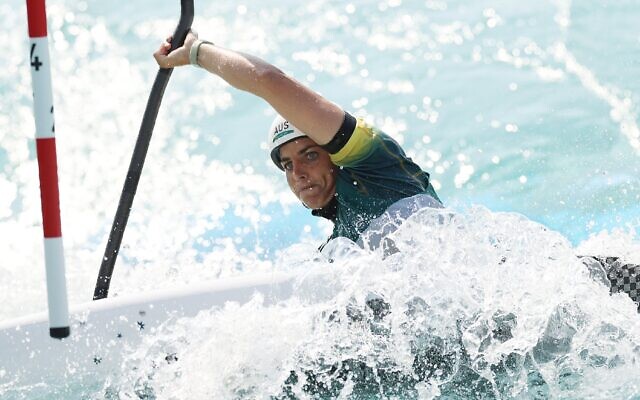 WITH her mum, coach and Olympic village roommate Myriam watching on from the side of Tokyo’s whitewater course – and her dad Richard trying to stay cool as a cucumber while commentating live on the Channel 7 broadcast – Jewish Australian paddler Jessica Fox felt a wave of different emotions when she crossed the finish line in Tuesday night’s women’s single kayak final, having earned bronze, but not the elusive gold she’d dreamed of.

The 27-year-old Sydneysider – who won silver at the London Olympics and bronze in Rio in 2016 – had qualified fastest for the final with an error-free paddle on the challenging 25-gate course.

Having watched the other seven finalists complete the course, Fox knew the times to beat were 105.50 seconds by Germany’s Ricarda Funk and 106.63 by Spain’s Maialen Chourraut.

Her confidence took a dent when she touched gate four and received a two-second penalty, but she recovered well and was powering through until another gate touch near the end relegated her, in an instant, from gold to silver to bronze.

Although her raw time was the fastest, with time penalties applied, it rose to 106.73 seconds. Crucially, that was 0.2 of a second faster than Italy’s Stefanie Horn, who came fourth.

Moments after the final, Fox said it was a “relief to be on the podium, but a bit of disappointment obviously [to miss out on winning gold]”.

“The mistake at the finish was just one too many, unfortunately.”

Later that night, Fox reflected on Instagram how she gave it everything.

“I went through all the emotions today! I’m lucky and grateful to be on the podium and cherishing this third Olympic medal.

“Thank you for all the love, support and encouragement. I’ll get back to you all soon, but first – it’s C1 (single canoe) time!”

Fox will now focus on winning gold in the inaugural Olympic women’s C1 final, which starts at 4:30pm today (Thursday).