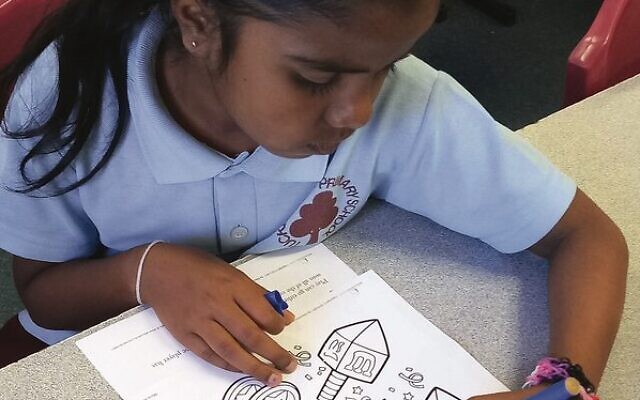 A student at Tucker Road Primary School learning about Chanukah.

I guess I was lucky. Between the ages of four and eight at London’s Connaught House School, my classmates included Ziyad Aladin, Khalid Ishmail and Yasser Al-Sayid. You’re right, none of them what you’d consider traditional Jewish names. But we played together and went to each other’s birthday parties.

And when I came home from school, who would greet me at the door of the block of flats where we lived with a beaming smile? That’s right, Mohammed the porter. His wife Aysha was our cleaner. And whenever we had people over for dinner parties, yom tovs or simchas, Aysha would help with the cooking, and Mohammed – who also worked at a fancy casino and who went to Mecca on Haj – would don his tuxedo and assume the role of barman and waiter.

Mohammed and Aysha were part of the family, Ziyad, Khalid and Yasser were my friends.

That’s how I saw them. Yes, they were Arabs and Muslims but how we related wasn’t tainted by any geopolitical or religious considerations.

So I was lucky. There were those within the community I grew up in who didn’t have the social exposure I had, and who would automatically write off anyone who was Arab or Muslim as an enemy.

You’d like to think that more than 40 years later and thousands of miles away in a state that prides itself on multiculturalism, that kind of attitude might have been confined to the history books, but sadly not. It persists in some quarters.

But this isn’t just about how we perceive them. It’s about how they perceive us too.

What would people who’ve never met a Jew or, for that matter, who know nothing about Israel think about us?

Well, if last year’s media coverage of Jews and Israel were the only exposure they had, chances are not a lot.

Jews were the ones who not once but twice were splashed across newspaper front pages and TV screens blatantly breaking lockdown rules. And Israel was the country depicted as reducing the homes of poor Palestinians to ruins. Hardly the best first impression.

And that’s where the Jakob Frenkiel Connecting Cultures service run by Zionism Victoria comes in.

In a nutshell, it’s a free service complementing the Victorian curriculum that brings students from non-Jewish schools all across the state into the heart of the Jewish community. The experience is tailor-made for the age of the participants and what they’re studying. They can visit a Jewish school, a shule, the Melbourne Holocaust Museum and the Jewish Museum of Australia. They can hear from rabbis, Shoah survivors, communal leaders and volunteers. Add in a falafel lunch and a short film about Israel, and the impact cannot be overestimated. 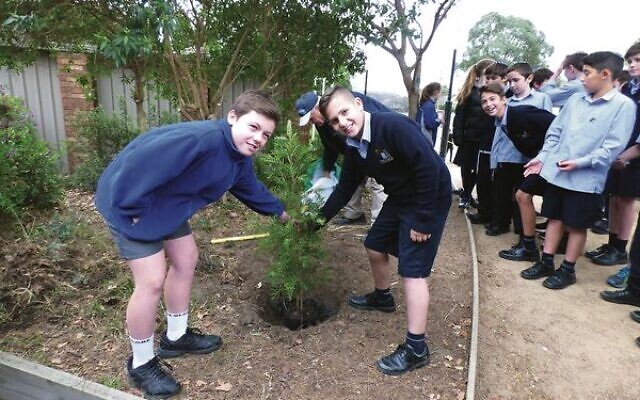 For young students whose only impression of the Jewish State likely comes from highly prejudicial news reports, this is a chance to see a vibrant, multicultural modern democracy, respectful of all faiths and a world leader in so many fields, from science to start-ups and from high tech to haute cuisine.

And given what we’ve been reading recently about antisemitic bullying at government schools and swastika daubings, the importance of reaching out to younger members of the wider Victorian community and educating them about who we are and our history is critical.

Earlier this month at Beth Weizmann, we had the pleasure of hosting 50 students from Melton Christian College. It was as much an education for me as it was for them. As they sat in one of the rooms of the Lamm Library between their visits to the Holocaust Museum and St Kilda Shule, they bowed their heads and said grace before they tucked into their falafel and pita. Frum Christian kids. Who knew?

One very politely came up and, after saying what an eye-opening experience it was, asked if he could wander around the library and look at the books and Judaica on display. A short while later, Ruth from the library called me in my office to say what a pleasure it was to see all 50 of the students now perusing the bookshelves.

From Melton to Mildura and from Wallan to Wonthaggi, each year hundreds of students converge on Caulfield for Connecting Cultures. And their schools in Country Victoria are more than happy to reciprocate. Leibler Yavneh primary students, for example, became penpals with children from schools in South Gippsland and went to experience a little of their lifestyle, learning about topics such as dairy farming and coalmining.

Cultural educator Rob Robertson, who hailed Connecting Cultures as “one of the most rewarding and educational programs Wonthaggi North Primary School has been part of”, enthused that it “promotes the culture of peace and acceptance of others”, adding that long-lasting friendships are forged not only between students from different schools but also teachers.

Crucially, he added, it “plays a significant role in planting seeds of tolerance, compassion and understanding that will contribute towards the creation of a more harmonious society for the future to come”.

Surely no one can question whether that is an end worth pursuing.

As for Ziyad, Khalid and Yasser, I’ll be honest, it’s been many a year since I last saw my Muslim playmates. But I can only hope that they recall their Jewish friends from Connaught House School with the same sense of warmth with which I recall them. And critically that our shared childhood meant they grew up without the prejudicial blinkers towards those of a different faith or ethnicity that afflict so many in our society.

Ultimately, when cultures connect, barriers are broken down. And in today’s world we must all do our bit to make that happen.

Zeddy Lawrence is the executive director of Zionism Victoria.