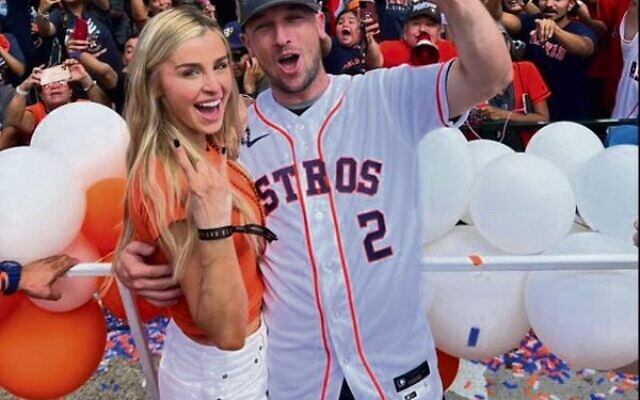 Houston batter Alex Bregman celebrating in front of Astros fans after the World Series win, with his wife Reagan.

Jewish batter for the Houston Astros, Alex Bregman, copped a broken left index finger during his team’s 4-1 game six victory over the Phillies at Minute Maid Park, Houston, last Saturday night, but any pain was more than replaced with the joy of being part of a World Series winning team.

Bregman scored four runs in the six-game series, which the Astros won by four games to two, delivering them their second title in six years.

The 28-year-old said in a post-match interview posted on the Astros’ website, before a victory street parade attended by close to 1 million fans, that “Winning it [the World Series] is super exciting, and a dream come true for every single person in here [the club]”.

“You work very hard all year long to try to accomplish it, and I think everyone in our clubhouse believed we could do it.

“And we have a really young team, so the window [for further success] is going to be open.”