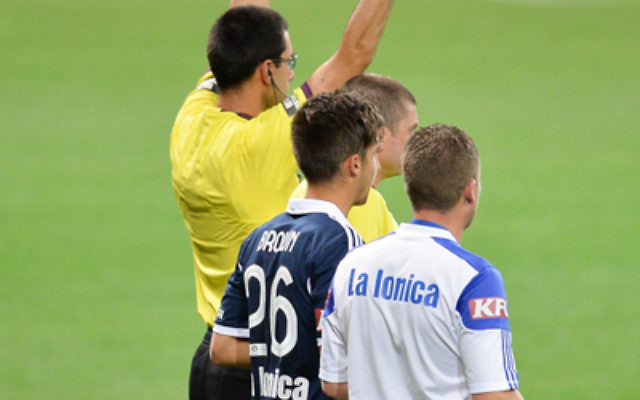 RISING soccer star Jordan Brown is taking giant strides in his fledgling football career, playing the past two of the past three games for Melbourne Victory in the Hyundai A-League, including a stellar debut.

“It’s really an honour to be able to play in the first team,” Brown told The AJN.

“I’ve been expecting to play in the Youth League team all year, so to be on the bench, let alone get minutes is just something else, it’s what we work for.”

With injuries paving the way for his selection against Western Sydney Wanderers, the 17-year-old then travelled to New Zealand last week, where he made a late cameo in the side’s disappointing 5-0 thrashing at the hands of Wellington Phoenix.

Now with senior experience under his belt, Brown is looking to impress head coach Kevin Muscat and secure a spot in the senior team for the remainder of the season.

“It was a disappointing result, but it was good to be on the park again,” Brown said.

“They don’t always give us direct feedback, so that comes if they pick you again, but I think I was lucky and football is about luck and timing – playing well at the right time.

“There are some players to come back from injury, overseas commitments and others moving around like Tom Rogic, so they’ll probably take my spot, but it’s good to know the club can rely on me.”

The youngster admits it’s a huge step up in class playing alongside the likes of Socceroos Archie Thompson and James Troisi among others, but he’s confident he can mix it with the best.

“It’s been a massive gain to play alongside them in training as well as games,” Brown said.

“They are great players who work so hard on and off the field, they’re incredibly smart and ultimate professionals, so it’s amazing to be on the park with them.

“And they’re really nice guys who have been around the block, so they’ve helped me out a lot.”