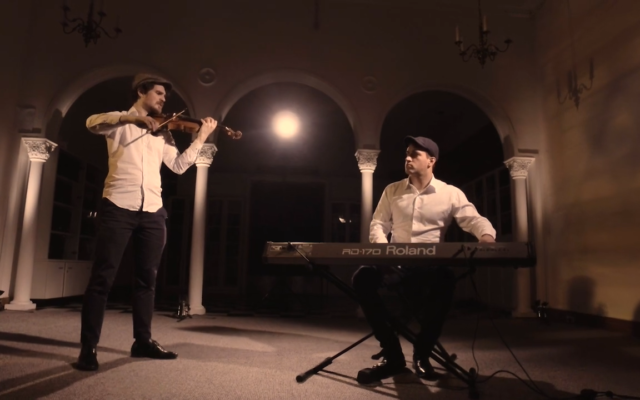 Ben Adler and Paul Khodor have been playing music since they were young, Adler at Emanuel School then Newington College and the Sydney Conservatorium of Music, and Khodor at Moriah College. Khodor also performed with the Sydney Youth Orchestra and Willoughby Brass Band as a tubist.

After playing music together for more than a decade, Adler and Khodor, together with Josh Druery, Chutney’s original clarinettist, played at the Limmud Oz Festival 2019. What started there as a trio expanded to a quintet, and within six months they were gigging up and down Sydney’s Marrickville Rd.

Adler and Khodor describe Chutney as “a klezmer fusion band, playing a high-energy mix of original compositions, modern arrangements of traditional klezmer tunes and cheeky ‘klezmerified’ reinterpretations of pop classics.” The band doesn’t shy away from mixing styles, ranging from gypsy to tango, jazz to rock.

A spin-off project from the main band, Chutney Unplugged gives Adler and Khodor the opportunity to explore their favourite Jewish songs.

With soulful tones and hauntingly beautiful accompanying videos, Chutney Unplugged stirs up emotion with every listen.

“It started during last year’s COVID lockdown, when it was illegal for the whole band to meet,” the duo told The AJN. “We wanted to bring some light to the Jewish community on the occasion of Yom Yerushalayim, so we recorded our own arrangement of Yerushalayim shel Zahav, which we had honed for years at interfaith events in Homebush and Blacktown.”

Within days, the recording had attracted international attention, and was played on national Israeli radio.

This year, encouraged by the success of their first arrangement, Chutney Unplugged recorded Avinu Shebashamayim, the Prayer for Israel, at Sydney’s Central Synagogue, in honour of Yom Hazikaron and Yom Ha’atzmaut. And, just before Rosh Hashanah, they recorded Avinu Malkeinu, as a salve for the locked down communities of Sydney and Melbourne.

Recorded and filmed in one take by Joshua Marks at Emanuel Synagogue’s Neuweg Sanctuary, the hope is that the song brings people warmth, beauty and hope.

“Even when things seem dark and fractured, there is still community, and the promise of a brighter tomorrow,” they said.

Knowing that it is customary to listen to music during the Ten Days of Repentance that prepares one spiritually for Yom Kippur, the duo believes there is nothing more fitting than Avinu Malkeinu. “Avinu Malkeinu is the central prayer of this Yamim Noraim period, and one of the most recognisable, beautiful and loved melodies in the entire Jewish liturgy,” they said. “When we decided to create something to ease the difficulty of bringing in the new year in lockdown, Avinu Malkeinu was our first choice.”

They are considering bringing out another recording to commemorate Yom Hashoah next year.