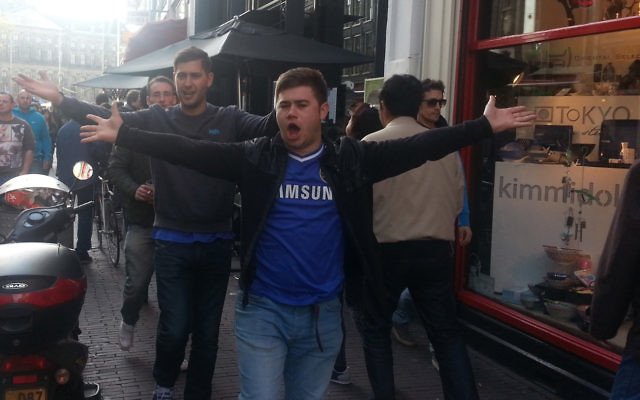 ITZIK Shanan and Abbas Suan watched last week as 100,000 English soccer fans at London’s Wembley Stadium sang along to an operatic rendition of Abide With Me, a Christian hymn that has become something of a soccer anthem.

He said it was a reminder of the sport’s potential – and its pitfalls.

Shanan, who began a campaign to eliminate racism from Israeli soccer, and Suan, a well-known Arab-Israeli player, were part of a delegation of 10 Israeli Jews and Arabs in Britain for five days of anti-hooliganism training ahead of Israel hosting the UEFA European Under-21 Football Championship next month.

“It was amazingly cultural,” Shanan said. “It showed me soccer can be truly a cultural event, but [also] reminded me of the long road that lies ahead of Israeli soccer until we catch up to England.”

For the past decade, England’s Football Association (FA) has trained dozens of Israeli activists who hope to re-create what they view as the FA’s success in reducing widespread dis- plays of racism.

England is described as “a world leader in dealing with soccer racism and hooliganism” on the website of the New Israel Fund, the US-based social justice group that created and bankrolls Shanan’s Kick Racism Out of Israeli Football.

But a recent spate of anti-Semitic incidents in English soccer, and the FA’s refusal to fully adopt new European countermeasures, are making some question its suitability to instruct others in countering racist tendencies among fans.

“Clearly, Britain has not resolved its soccer racism and violence problem and is therefore no model for Israel,” said Manfred Gerstenfeld, a Dutch-born scholar of European anti-Semitism at the Jerusalem Centre for Public Affairs.

Recent racist incidents have prompted the Union of European Football Associations to introduce a 10-game ban on anyone caught engaging in racist abuse.

But it was the FA’s Kick It Out program, which focuses on preventing racism, that inspired Shanan’s organisation.

“One lesson we learnt from England is to integrate Arab and Jewish children in one team instead of letting them play on opposite teams,” Shanan said.

As in Britain, Israeli soccer racism continues to be a problem, despite the efforts of police and activists.

Gerstenfeld, who moved to Jerusalem in 1968, acknowledges that racism exists in Israeli soccer, but said it’s nothing compared to the violence endemic in British and Dutch soccer.

Adam Green, a Londoner and Chelsea supporter who travelled to Amsterdam to watch his team battle Portugal’s Benfica in the Europa League final, offered a simpler distillation of the football hooligan’s credo.