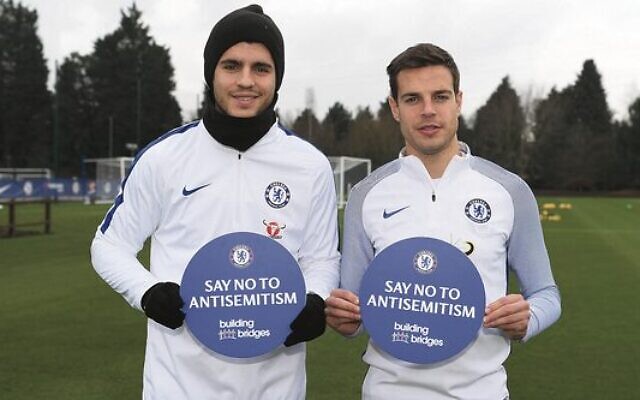 A FAN of Chelsea soccer club who posted antisemitic and racist tweets aimed at fans of a rival team, Tottenham – including photos of Auschwitz and a man doing a Nazi salute – has been jailed for eight weeks.

Meanwhile, three supporters of West Ham, another London-based club, were arrested in England after fans were filmed singing antisemitic songs at an ultra-Orthodox Jewish man on a flight to Belgium, where the team was playing Belgian side Genk in the Europa League.

Insisting they were “appalled by the contents of the video circulating on social media”, the club stated, “We continue to be unequivocal in our stance – we have a zero-tolerance approach to any form of discrimination. Any individuals identified will be issued with an indefinite ban from the club. Equality, diversity and inclusion are at the heart of the football club and we do not welcome any individuals who do not share those values.”

In the Chelsea-Tottenham case, Nathan Blagg, 21, who told police the tweets were “banter between mates”, pleaded guilty to seven counts of sending offensive messages.

District Judge Michael Hamilton told him only immediate custody would be a suitable punishment for the “abhorrent and grossly offensive” tweets.

“Quite frankly, the content of these messages was despicable,” he said. “References to the Holocaust and other matters cannot on any view ever be categorised as banter.”

Prosecutor David Roberts said the tweets about the Tottenham side were more offensive in the context of “a history of association with the Jewish community”.

Tottenham traditionally has a large fan base among London’s Jewish community and some opposing fans regularly direct antisemitic abuse at supporters of the team.

Some Tottenham fans call themselves the “Yid Army” in a bid to appropriate the term and to deflect antisemitic abuse.

Blagg, described as a lifelong Chelsea supporter, posted a picture of the train tracks to Nazi concentration camp Auschwitz on Twitter with the message: “Spurs are on their way to Auschwitz,” Westminster Magistrates’ Court heard.

Maeve Thornton, representing Blagg, said he had left Twitter and was “deeply remorseful”.

Chelsea, which is owned by Roman Abramovich, a Russian Jewish billionaire – who has acquired Israeli citizenship – has launched several campaigns to combat antisemitism among supporters.