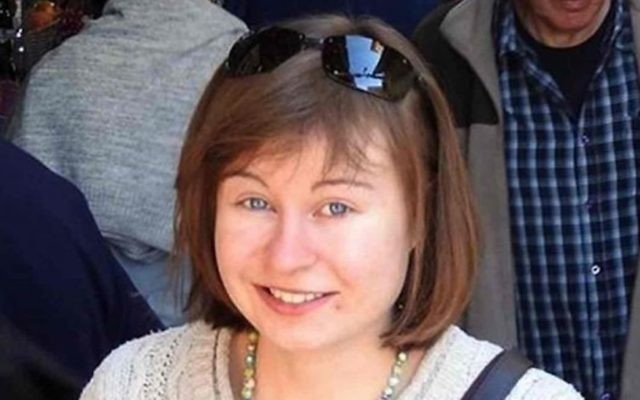 JERUSALEM – With Jerusalem residents reeling from a fatal attack and security prisoners launching a mass hunger strike, tensions between Palestinians and Israel are rising again.

The latest assault brought the sight of blood and paramedics back to Israel’s public transport network, as Jamil Tamimi, a 57-year-old Palestinian from East Jerusalem, attacked his victim on a Jerusalem tram. But the reverberations of this attack were felt far away, in England.

On Monday, a minute’s silence was held at an Easter football match of Derby County. The victim, 20-year-old Hannah Bladon was a fan of the team – and a British-Christian woman with no connection to Israel apart from deciding to spend a five-month stint studying at Hebrew University. The university expressed “deep sorrow” over the murder and sent “deepest condolences” to the family.

As Bladon’s friends, family and fellow football fans gathered to mourn her, plans were afoot to turn the temperature up further in the Israeli–Palestinian conflict, by getting more than 1000 of the Palestinian security prisoners in Israeli jails to start a hunger strike.

The strike will go hand-in-hand with large rallies in Palestinian centres, and as it progresses and stories of the demising health of strikers emerges, it is expected to ignite widespread anger in the West Bank and Gaza.

The strike is already the rallying cry for Palestinian politicians. “In the midst of this battle, I call on all the Palestinian people and national institutions to show more solidarity so we can deliver the message of the prisoners to the whole world,” said Palestinian Prime Minister Rami Hamdallah.

“Let us all push for the largest international, popular and official movement to stand by the prisoners at this critical time.”

Demands of the strikers range from an end to Israel’s practice of detaining some terror suspects without trial and putting some in solitary confinement, to doubling the length of family visits to an hour and a half, allowing prisoners to have pictures taken with their families every three months, and giving them access to more TV channels and air conditioning.

Meanwhile, in Israeli politics, focus is on the aftermath of last Friday’s attack. Israel’s President Reuven Rivlin has spoken of how he was “filled with sadness” as he heard of the stabbing, and pledged: “Terror can never overcome us. Terror will never destroy our lives here.”

The Israeli establishment was keen to stress that the attack was terror, as in the hours after it was perpetrated, internationally there was a belief that it was a nonpolitical act by a disturbed man. Tamimi recently tried to commit suicide in a hospital in northern Israel by swallowing a razor blade, and in 2011 he was convicted of sexually abusing his daughter.

But Shin Bet noted that it is a known phenomenon for people with personal difficulties to try to become so-called martyrs to redeem their reputation. “This is not the first time that a Palestinian suffering from personal, mental or moral distress has chosen to commit a terrorist attack in order to escape his problems,” Shin Bet said in a statement.

On Tuesday, a state psychiatrist ruled that the alleged attacker is fit to stand trial, despite his mental health issues.

It has emerged since the attack that Bladon found herself near the murderer due to an act of kindness. According to Israel’s Channel 2, she had vacated a seat elsewhere to give it to a mother holding a baby.

The murder scene was horrifying even by the standards of paramedics who have worked at many terror sites. “It was a very difficult scene, a scene of lots of chaos, noise and blood,” Nachman Revivo of the Zaka first response organisation told The AJN.

Expressing sympathy for the British family, Revivo said that the death underscores the indiscriminate nature of terror. “Terrorists don’t pay attention to whether people are from Israel, France or the UK. They don’t care.”

Bladon’s family released a statement saying: “She was driven and passionate and her death leaves so much promise unfulfilled. Our family are devastated by this senseless and tragic attack.”

Israeli authorities are now waiting nervously to see if the hunger strike will spur more violence on the ground – and, just a few days after the prisoners stopped eating, some Palestinian leaders are already predicting that it will.