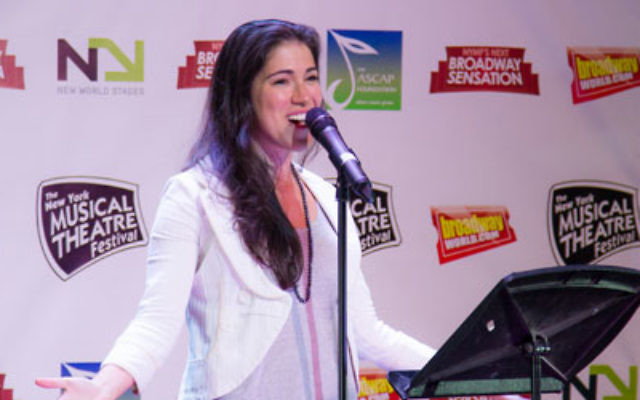 EVER since singer-actress Alexis Fishman staged her musical Der Gelbe Stern (The Yellow Star) in Sydney in 2011, she has dreamed of bringing the story of a Jewish cabaret singer in Germany’s Weimar Republic to the Broadway stage.

This month her dream will come true when Der Gelbe Stern is staged as part of the annual New York Musical Theatre Festival.

But in a twist befitting a Hollywood script, Fishman also landed a role in the new musical, Atomic, being staged at the same time, which could have left her with an agonising choice.

So the Sydney-born performer, who has been based in the Big Apple for the past six years, grit­ted her teeth and decided to perform in both shows. And for a couple of days that will mean performing Der Gelbe Stern at the Laurie Beechman Theatre in W 42nd Street and racing to the Acorn Theatre just a short distance away for Atomic.

“It’s very exciting – I could not say ‘no’ to either of these opportunities, so I had to work out how to do both,” Fishman says by phone from New York.

“We’ve scheduled Der Gelbe Stern around Atomic, so on one day there’s a 1pm show and I also do a Sunday matinee before performing in two shows of Atomic. The theatres are just across the road from each other, so that helps with the logistics.”

Der Gelbe Stern is being staged from July 14-21 while Atomic opened last week – although the official opening night is on July 13 – and runs until August 26.

“There will be a crazy couple of weeks with 16 performances of Atomic and five shows of Der Gelbe Stern,” she says.

It has been a long journey for Der Gelbe Stern since Fishman premiered it at the Adelaide International Cabaret Festival in June 2011, followed by seasons at the Melbourne Cabaret Festival and the Seymour Centre in Sydney.

Der Gelbe Stern is a musical in one act and tells the story of Erika Stern (Fishman), a fictional Jewish chanteuse living and performing in Berlin in 1933 as the Nazis begin their rise to power. Erika is provocative, sassy and feisty and the show portrays the excesses and daring of her era.

Using German, British and American cabaret music of the 1920s and 1930s, it’s a cabaret within a play, offering audiences a glimpse into the final days of the Weimar Republic.

“The New York production will be significantly different to what audiences saw in Sydney. The relationship between Erika and band leader Otto (Heath Saunders) has been expanded,” she says.

After Fishman won the New York Musical Theatre Festival’s “Next Broadway Sensation” competition in 2012, Der Gelbe Stern was accepted into this year’s festival where more than 20 shows are being staged from July 7-27.

When Fishman was in Australia last year she participated in a week-long workshop of Atomic with Australian producer Danny Ginges, but could not stay for its premiere season in Sydney last November at the NIDA Parade Theatres.

“I thought that it may be staged in New York later this year, but it came together much more quickly and I was offered a role in it,” she says.

“I’ve wanted to do Der Gelbe Stern in New York ever since I performed in it in Australia.”

While the New York Musical Theatre Festival is providing development support and a $5000 production subsidy for Der Gelbe Stern, Fishman says the show costs much more to stage and hopes that the public will help by donating on the show’s website.

“Staging a musical is not cheap, as we need to pay the musicians, make the set and costumes, and meet production costs such as lighting and sound design,” she explains.

However, the festival is an important event on the New York theatrical calendar and believes the investment will be worthwhile.

“There are producers in the audience looking for the ‘next big thing’, and for shows that can be taken further and developed,” she says.

Atomic is a musical set around The Manhattan Project in the United States, where the world’s leading scientists worked to develop the atomic bomb.

Fishman plays the role of Leona Woods, a female scientist working on the project.

“She’s a fascinating woman during that remarkable period in history. I’m proud to be involved in the show.”

Atomic tackles the issues surrounding the development of the atomic bomb against a rock music score and more than a dozen original songs.