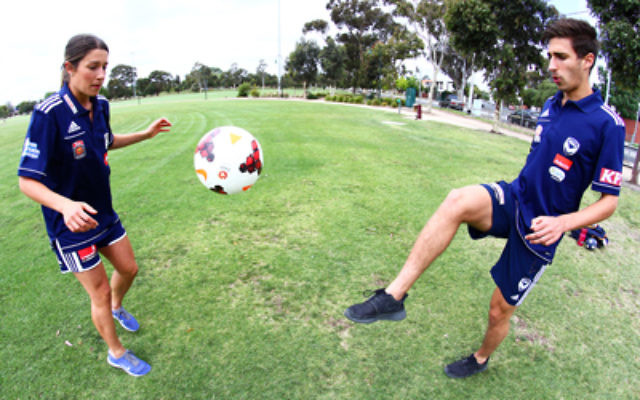 EMERGING soccer star Jordan Brown made his long-awaited debut for the Melbourne Victory senior side last week, making a late appearance during the team’s 3-1 victory over Western Sydney Wanderers at AAMI Park.

Brown, 17, replaced James Jeggo in the 80th minute, and became just the second Jewish footballer in the league and the first since former Sydney FC American Michael Einfeld in 2009.

Brown was unavailable for com- ment as The AJN went to print due to training and recovery commitments, but older sister Ashley, a star in her own right and part of Victory’s W-League squad, said it’s a great achievement for him to reach the top flight.

“It was unbelievable when we found out he was playing,” Ashley told The AJN.

“We knew there was a chance and when we found out [Mark] Milligan was out, he was named the morning of the match.”

With the Victory having conceded a late goal to make the scores 2-1, Brown kept the ball alive from an attempted clearance, before linking with Socceroo James Troisi to set up Brazilian Gui Finkler for the sealer.

“He did so well when he came on and had a couple of chances, one led to a goal, which will give him confidence to perform during games and at training,” Ashley said.

Now with senior experience under his belt and midfielder Milligan out of action for six weeks, Brown is looking to continue to catch the eye of coach Kevin Muscat.

“It will be tough for him to stay,” Ashley said.

“A lot of events have led to this and he does have a chance, but there are a couple of other players ahead of him.”

Meanwhile, Ashley has continued her bad luck with injury, re-damaging the same knee she recovered from in her first game back.

Scans confirmed it is a ruptured anterior cruciate ligament injury and the 19-year-old will again face several months on the sidelines.

“I knew straight away and it’s been hard to process,” Ashley said.

“I’m aiming for nine months and it will be tough, but I guess it’s part of playing the game.”