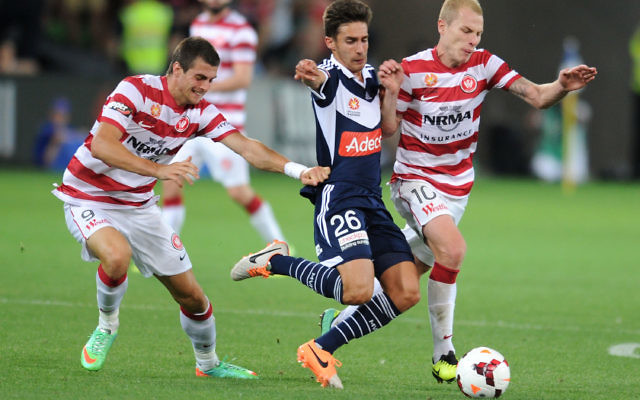 Jordan Brown contests the ball against Aaron Mooy (right) and Tomi Juric of the Western Sydney Wanderers during an 2013/14 A-League round-19 match at AAMI Park in Melbourne. Photo: Vince Caligiuri/Getty Images

WHEN the 10th edition of the A-League kicks off on Friday night, Melbourne Victory’s teenage sensation Jordan Brown will be thousands of kilometres away from AAMI Park.

The 18-year-old will miss the first two weeks of the season after he was called up for international duty at the Asian Football Confederation Under-19 Championship in Myanmar, where the young Aussie squad is fighting for a berth to the 2015 Under-20 World Cup. The A-League can wait – for now.

It’s been an important preseason for Brown, who flitted between Victory commitments and preparations for World Cup qualifiers.

Despite the heavy training load, Brown says he relished the experience.

“I’ve had preseason at Melbourne Victory, so that’s been a lot of hard work, a lot of training, lots of fitness work to get ready for the season,” Brown told The AJN .

“On top of that, with the Australian Under-20s, it’s really important that we qualify for the World Cup. So the coach is trying to get us together as a team as much as he can, because obviously we’re from all around Australia, and even some overseas players [are] involved.

“So it’s been busy, going from one team to the other. But it’s good, you get different coaching, different ideas and if you can keep up, it works really well.”

The silky-skilled defensive midfielder has enjoyed a regular starting spot with the Under-20s and says Australia should fancy its chances against a group of Uzbekistan, the United Arab Emirates and Indonesia.

“I think we have a strong team and should do well. The group stage is so quick, three games in four days, and if you don’t get out, then that’s the end.”

Making the Victory’s first XI is a much tougher prospect. After playing three games last season, Brown is eager to increase his output, but faces stiff competition in his position from teammates including former Socceroos Mark Milligan and Carl Valeri. On the flip side, it gives Brown an opportunity to learn first-hand from players who have competed at the highest level.

“Training with these guys is definitely intimidating, but you’ve also got these guys helping you out,” he said.

“They’re all really top guys and you learn from them, not only how they play but also how they are off the field.

“I think [coach Kevin] Muscat is a brilliant coach – again, he’s like the other older boys on the team, really nurturing to the younger guys.

“The team he’s brought together this year, like our a new striker (Bersat) Berisha, we’ve recruited well and it should be a really good season.”

Under the tutelage of Victory staff, Brown has focused on improving his defensive running and accountability. He feels this will lead to increased playing time, and perhaps even a chance to line up opposite Melbourne City’s boom recruit, David Villa.

“Last year he was in the Champions League final and now he’s coming to play A-League.

“Even if it’s for Melbourne City, it’s still good for Australia, putting us on the football map, and hopefully I get to play against him at some point.”

But Villa can wait – for now.