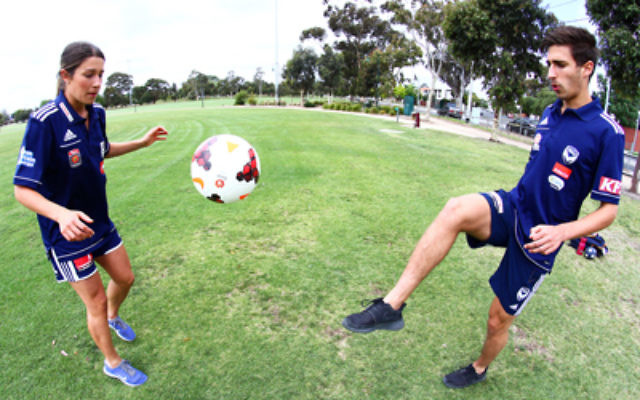 STAR siblings Jordan and Ashley Brown are set to return for the Melbourne Victory after lengthy injuries, with their respective recoveries now complete.

Jordan has had to overcome osteitis pubis for the past 18 months and is glad to be back on the pitch for Victory’s youth league team.

“Obviously it’s frustrating, but it’s just one of those things you’ve got to get through,” Jordan told The AJN.

“It’s good to be out there on the park again and getting proper games in.”

He believes he can crack a spot in the senior side, but admits he will have to impress new boss Kevin Muscat during his time with the youth squad

“The only way to get to the A- League is to play really well with the youth team,” Jordan said.

“But there’s a lot of opportunities to show the coaches and the boss that you deserve it.”

He’s also eyeing off a spot in the Young Socceroos squad heading to the Asian (AFC) Under-19 Championships next year.

“It’s always good to represent your country in any age group,” Jordan said.

“Now that we’ve qualified, it’s a really good opportunity for me and hopefully I can prove myself to them by playing well.”

Meanwhile, sister Ashley has recuperated after an 18-month lay-off due to a knee reconstruction and returned for Victory’s hit-out with Newcastle on the weekend.

“I’m very excited to be back,” Ashley told The AJN.

“It’s been a little bit longer than the 12 months that it was meant to initially be, but I’m ready to go now.

“And once you get your first tackle or first goal you start to build confidence again as you go through all the motions.”

She’s now setting herself to return to the field alongside the likes of superstar Lisa De Vanna and skipper Stephanie Catley.

“We have some great players at the Victory and they’re incredible on and off the pitch,” she said.

“It inspires you to be better in training and games and I want to be a big part of the team.