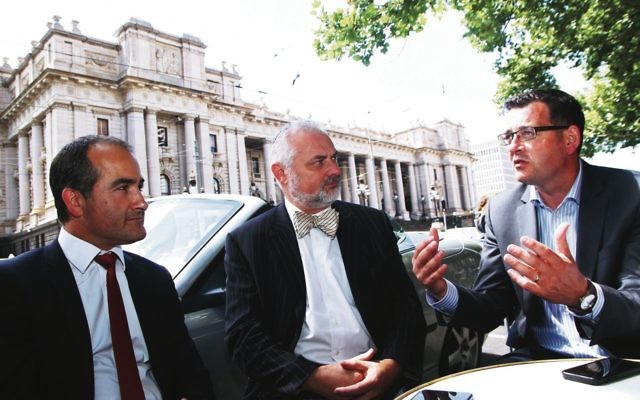 THE Victorian government has delivered on its pre-election pledge and granted Beth Weizmann Community Centre $500,000 to provide a significant upgrade to its security services.

The funding will go towards a $1.3 million wall to ensure the community facility is bomb-resistant amid rising concerns of terrorism and anti-Semitic sentiment.

The announcement came with the release of the Andrews’ government’s first Victorian budget last week.

Thanking the government for its ongoing commitment to the community’s safety, president of the Zionist Council of Victoria (ZCV) and Beth Weizmann chair Sam Tatarka said, “We are thrilled that the Andrews Labor government has seen fit to honour its pre-election commitment in its very first budget and that it has recognised the critical need to support this important community establishment that is so central to Jewish life in Melbourne.”

With reports of anti-Semitic incidents on the rise overseas, Tatarka said security for Jewish institutions must remain a top priority for both the Victorian and Federal governments.

“The Premier has shown that he and his government have a keen understanding of the key issues that plague our community which unfortunately include a need to address our security concerns, particularly in light of the worrying trend of attacks against Jews and Jewish institutions in Europe and elsewhere in the world.”

Despite the state government’s contribution to the centre, there is still a shortfall for the Beth Weizmann security upgrade which will cost around $1.3 million.

“We are hopeful that the Federal Government will also give earnest consideration to meeting its own pre-election commitment to community security,” said Tatarka. “Overseas experience dictates that we also pay very close attention to other communal buildings such as Beth Weizmann in today’s ever more hostile environment.”

The state funding is allocated under the Office of Multicultural Affairs, with Minister Robin Scott reaffirming the government’s unwavering support for “social cohesion and multiculturalism”.

Member for Southern Metropolitan Region Philip Dalidakis added, “The organisations at Beth Weizmann have always been there for seniors, kids and families. The local Jewish community needs this support, Labor promised it and today we’ve delivered it.”