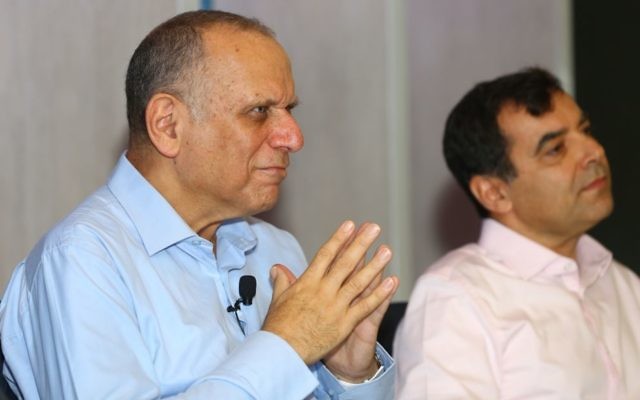 Dov Moran, invented of the USB flash drive, at a panel discussion at The Bridge Summit in Sydney.

A WHO’S who of Israeli business leaders in fin-tech, cybersecurity, agri-tech and impact investment gathered at The Bridge Summit held over two days in Sydney this week, discussing everything that drives innovation – from embracing risk to utilising chutzpah.

An estimated 400 people attended the event, hosted by the Israel Trade Commission, which last year led to hundreds of ongoing Australian-Israel connections, generating several million dollars’ worth of investment.

In a special media-only session to open the summit, three of Israel’s biggest names in the field of innovation shared their insights about what drives success.

Dov Moran, who invented the USB flash drive, said Israelis’ embrace of failure is actually one of the main ingredients in the -“start-up nation’s success, but teamwork, product excellence, timing and execution also play their part”.

“A culture that allows people to be creative, and sometimes fail, is a key part of Israel’s success,” Moran said.

“You learn more from failures – and I can say this from experience.

“The second company I owned was a real failure – but out of it came 30 subsequent start-ups.”

Moran noted the supercharging effect that an Israeli government policy, introduced in 1993, had on driving innovation: the provision of a financial safety against failure for new start-ups by up to 80 per cent in their first year.

“It’s also important to understand that not every success needs to be measured in financial terms only.”

Professor Amnon Shashua – the co-founder of Mobileye, which develops technologies that allow computers, including driverless cars, to “see” – said Israel has brought prosperity out of adversity. It is a state of mind, a culture, where all the founders and co-founders of new start-ups are in their mid-20s. They are not thinking, what will happen in my 30s if I fail?” Shashua said.

“It is useful, I think, for Australia to see what Israel has done to foster innovation. The government has lowered its company tax rate in the high-tech sector to 12 per cent, and it has introduced incentives to build research and development in regional hubs – not just in Tel Aviv.”

A pioneer of the venture capital industry in Israel, Hillel Milo said, “Innovation is not a trend, but a necessity.”

Asked what advice he had for Australia, Milo said the aim “should not be to achieve 22 new start-ups by 2017”, but rather to develop a genuine culture of innovation to propel further research, development and investment.