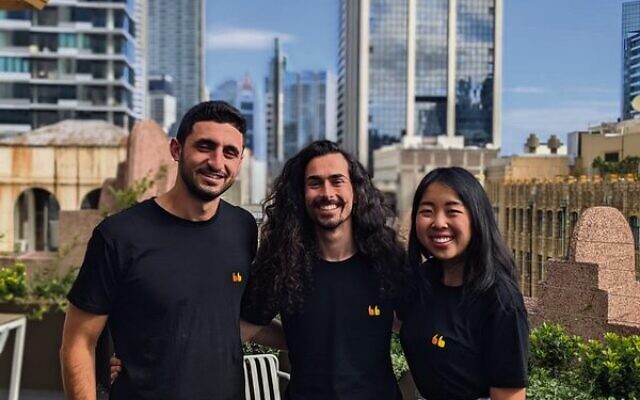 Jono Herman, along with co-founders Marina Wu and Dan Brockwell, launched Earlywork – a community network for young people looking to start careers in tech, start-ups and social impact – in September 2020.

He said they launched the venture initially as a way of “solving our own pain points” as they searched for careers in tech themselves.

“We went through university and got involved in start-ups and realised that there weren’t necessarily [enough] resources, programs, initiatives for that world in the same way that there are for some of the more traditional careers,” Herman told The AJN.

“We started just putting content out there, which formed into a community, and now [we’re] trying to build a fully-fledged business out of it and having a lot of fun.”

Herman, Wu and Brockwell were featured in The Australian‘s Top 100 Innovators 2022, something which Herman said was “very welcome”.

“It’s nice to be recognised for what we’re doing and what we’re providing to the ecosystem, and it’s good to be able to build the awareness,” Herman said.

Earlywork began as a newsletter curating the best roles in the tech and start-up space, but soon flourished into a community of young people interested in tech careers.

Earlywork hopes to enable students to connect with those in the industry, strengthening the next generation of founders and operators in Australia and New Zealand.

“There’s a big gap for helping people interested in these future-focused career paths as they come out of university, in a place that isn’t Silicon Valley, where there’s all these big tech companies at your front door,” Herman explained.

“I think in order to build the next generation of [Australian tech] companies, you need to start to build those graduate pathways or grassroots programs to connect with the best young talent.”

After Herman graduated from Moriah College in 2015, he spent a year on the Israel By Choice (IBC) gap year program, and has since been involved in other community organisations.

Brockwell graduated from Emanuel School in 2015, and while he and Herman played soccer for the Maccabi under-nines, Herman said they only reconnected at university.

“There’s not really that many companies out there that are building communities for the sake of communities,” reflected Herman.

“I think a lot of the inspiration for focusing on community building has been connected back to the wonderful community that I’ve grown up with, both locally and [with] Jewish people around the world.”