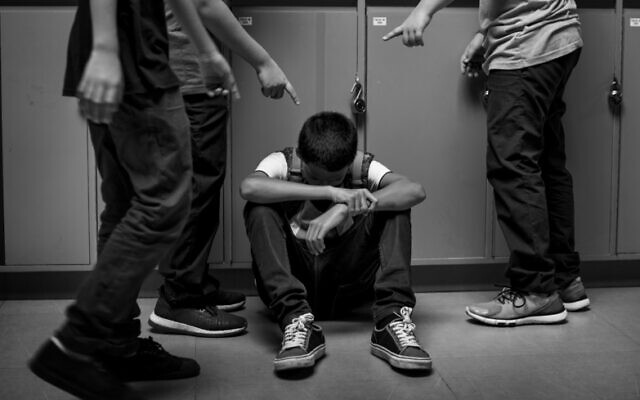 ANOTHER former Jewish student of Brighton Secondary College has revealed his experiences of antisemitic bullying, alleging he experienced verbal and physical abuse, including being threatened with a knife.

Sharing his account with the Anti-Defamation Commission (ADC), the boy says that shortly after he commenced at the college in year 7 in 2013, so did the derogatory label, “Jew boy”.

“Students were swearing at me in the corridors, yelling at me to go ‘burn in an oven’,” he recalled.

In year 8, the boy says the bullying became physical, claiming he was “pushed down and kicked at [as] students would walk past and look the other way”.

“I notified the school 10 times within two weeks regarding the many instances of antisemitic name-calling and physical abuse, including hitting and punching.” But still, no action was taken, he said.

The boy spoke of an incident where he was kicked in the stomach so hard he fell. But when he reported it to a teacher, he says he was accused of lying and was told not to bother her again with this “nonsense”.

Then in year 9, he claims he was shoved into the boys’ toilets and threatened with a knife to remain silent and not fight back.

“I was punched and hurt and abused so badly that I was unable to leave the cubicle for an hour,” he told.

“I went to the office and told them and showed them what had occurred. Another note was written down and said that it would go to the vice-principal straight away. I never heard a word from anyone.”

Shortly after, the boy left Brighton Secondary College for a Jewish school. There he confided in a student welfare teacher about his experiences. In an attempt to bring the boy some resolution, she set up a meeting for them at Brighton Secondary to discuss the allegations with the school’s newly appointed principal, Richard Minack.

Hoping for “some acknowledgement” of his ordeal, the boy alleges Minack said the claims would be investigated and he would come back to them with an outcome. But he didn’t, says the boy, adding that Minack continued to dodge his student welfare teacher’s multiple attempts to follow up.

“I remember when we left the school after that conversation with Minack, all of the anxiety came back to me. Then, realising that I didn’t get any outcome whatsoever, or any recognition, it was hard to keep my emotions together,” the boy told The AJN.

Now in his late teens, he says his trauma continues to haunt him, adding that he still finds it difficult to trust friends and that his experiences cause him “a lot of anxiety”, fearful that “people are going to attack me for no reason”.

“It has affected my ability to create those friendships that I’ve always desired.”

The case is the third set of antisemitic bullying allegations levelled against Brighton Secondary College in as many weeks.

Victorian Minister for Education James Merlino said, “Discrimination in any form, including antisemitism, is completely unacceptable and will not be tolerated,” and, “to hear of more very concerning allegations is extremely worrying”.

“We simply must get to the bottom of what has occurred here.”

Merlino shared that the government has engaged the services of firm Worklogic “to carry out an independent investigation into the serious allegations of antisemitism at Brighton Secondary College”. He has implored students and families who have had any antisemitic experience at the college to call the Department of Education and Training’s (DET) dedicated racism hotline, “and they will help to put you in touch in with the independent investigators,” he said.

When The AJN put the latest allegations to Minack, a DET spokesperson said, “He will not be responding as these matters are now the subject of an independent investigation.”

In a joint letter to Daniel Andrews, Liberal MPs David Southwick and James Newbury have demanded the Premier step in to ensure the investigation is conducted entirely independently of the DET, “and ensure the findings are provided to the family and broader community”.

“Victorian children are subject to extreme vilification and violence, simply because they are Jewish … Time and time again, the DET has failed to take meaningful action on this urgent and worsening issue,” they wrote.

Federal Liberal Member for Goldstein Tim Wilson also wrote to Merlino saying the recent allegations “make any investigation urgent to outline whether there are systemic problems in Victorian public schools, and to hold those responsible to account”.

Reiterating the importance for an independent, open investigation, ADC chairman Dr Dvir Abramovich said the process must be “transparent [with] its full findings and recommendations released to the public”.

“Last year’s internal investigation has not been satisfactory, and the only way to find out what went wrong at Brighton Secondary College and to stamp out antisemitism at Victorian schools is to objectively examine the institutional failings that allowed abuse to take place,” he said.