In early 2019, former NSW fire commissioner Greg Mullins wrote to Prime Minister Scott Morrison about an imminent and unprecedented disaster. There was no response.

Yet by August, the bushfires were making international headlines in America.

Filmmaker Eva Orner remembers watching in disbelief. After all, it was still winter in Australia, definitely not the time that we would normally see flames.

“I remember by October seeing the smoke all over Sydney and just being shocked,” she told The AJN from her latest film shoot in South Dakota.

When she arrived in Australia for a visit, she remembers thinking the ABC radio was almost like a 24-hour emergency radio station. “It was just all about constant new fires, evacuations, fires spreading. And so that was fairly alarming.”

When it came to bushfires, “everyone was consumed by it”, she recalled.

What she remembers most though about her time in Australia was the 47-degree day that descended on Melbourne.

“I spent 34 years living in Melbourne and it never went above 44 degrees in February. And this was December and 47 degrees,” she recalled.

While everyone agreed with her that it was hot, she remembers thinking that it was beyond “just hot”, comparing the unseasonal heat to Baghdad.

Then, while on the plane returning to LA, as her eyes still watered and she continued to cough from the smoke, she decided that something absolutely had to be done.

And so, Burning was born.

Burning, which recently won the inaugural Sustainable Future Award at the Sydney Film Festival, points to the bigger issue – how Australia is failing to confront climate change, and how the younger generation is stepping up.

The documentary features interviews with a range of voices, which Orner says is very deliberate, explaining that they wanted a cross-section of people around the country. 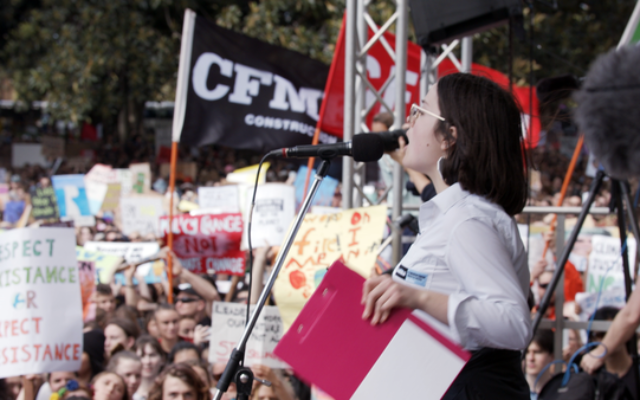 Daisy Jeffrey at the climate rally.

“What happened in Australia was really unusual with the student protests because Australia is not the most political country in the world,” Orner said. “So, I thought it was really interesting to see that a group of students had taken it upon themselves to try and, you know, change the direction the country was going in.”

And, they had so much support. “I thought it was really important to show what they had achieved and what they were feeling, what they want to ensure for their future.”

The imagery is heartbreaking and the sound – the howling and roar of the fire – is confronting.

Burning takes viewers through the history of bushfires in Australia, and by doing so, presents evidence that not only have the bushfires worsened in recent years, but the severity and frequency of the seasons are aligning with the forecasts of climate scientists. But through this narrative are woven the human stories. The families who survived the bushfires but who lost their homes.

Throughout the film, residents describe sirens sounding, phones going off and the immediate order to evacuate. As they read their messages and heard the alarms, all they had to do was turn around to be faced by the fire, coming directly for them.

The fires are described as “vicious monsters” burning almost like a predator that plays with its prey. While it creeps up quietly, within an hour it can change. And it’s indiscriminate, perhaps burning one house and leaving everything else around it.

The imagery is heartbreaking and the sound – the howling and roar of the fire – is confronting.

Orner acknowledges that they couldn’t be relentless with footage of the fires. That’s been done – there’s no shortage of clips of the horrifying images. But at the same time, Orner wanted to be confronting.

“One of the things that was really interesting to me and why I thought we could make a global film, even though it’s an Australian story, is that there was so much global interest in the fires at the time,” she explained. 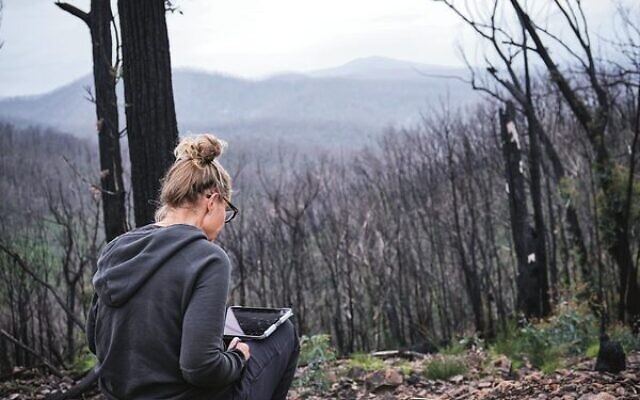 “It was front page in the New York Times, day after day after day. The whole world was watching. And I think one of the things that really clenched a global audience was the animals, because people love Australian animals, and the death toll was so high and the impact on animals was so high.”

But the film is more than the bushfires.

At the end of the day, Burning is a call to arms. As Orner said, if nothing is done, “this will happen again, and it will keep happening more frequently”.

And, looking back and looking forward, it leaves audiences asking, what if something was done? What if nothing is done?

Burning will launch globally on Amazon Prime on November 26.