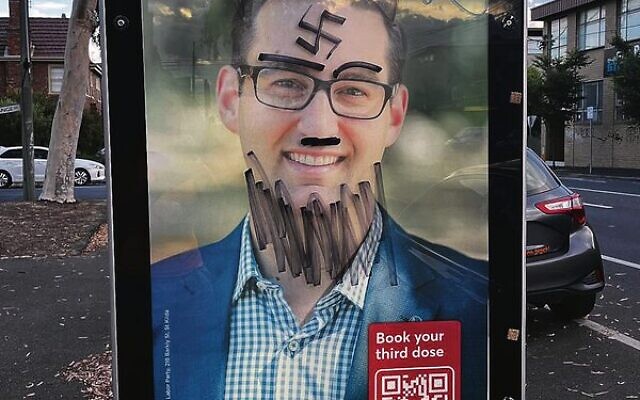 The defaced poster of Josh Burns.

FEDERAL Treasurer Josh Frydenberg has reached across the party divide to condemn an antisemitic graffiti attack on his parliamentary colleague Josh Burns, the Member for Macnamara, amid a groundswell of support for the MP over the incident.

An election poster located on Inkerman Street in St Kilda East featuring a photograph of Burns was defaced with a swastika, an Adolf Hitler moustache, a beard and a kippah scrawled over the billboard.

Frydenberg stated on Facebook, “It doesn’t matter what your race, religion or political allegiance is, such a disgraceful and criminal act has no place in our country. The culprit should be ashamed of themselves.”

Burns told The AJN, “It was obviously very disappointing to see this kind of ugly graffiti in the heart of our local community, but I was overwhelmed with the support I received from parliamentary colleagues on both sides of the political divide, and from people across the nation.

“There’s no place for the swastika in Australia and there’s no place for antisemitism or any form of racism in this country. The ugly actions of a small few will only galvanise us to keep fighting against anti-semitism, racism and extremism.”

Uploading a photo of the defaced poster on Facebook, the Labor MP posted, “I’m not putting this up for sympathy – to be honest, I’ve got thicker skin than that. But I’m putting this graffiti up as a reminder that there are some lines that shouldn’t be crossed. And because democracy is precious and needs defending.

“Elections can be brutal and sometimes politics in Australia is not practised at the highest level. I get that. But being able to freely express one’s political views, peacefully and respectfully, is an essential part of Australia.”

Thanking a multitude of well-wishers, Burns stated, “It will be cleaned today and we will continue on with a full day of campaigning. With even more determination and focus to help shape and build our wonderful, democratic Australia.”