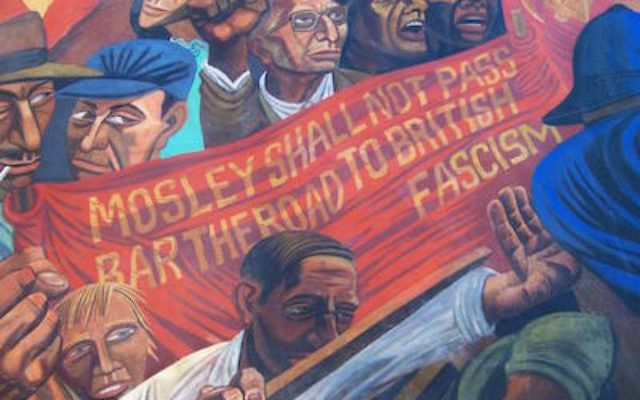 Eighty years ago last month, the Jewish residents of London’s East End joined forces with communists, socialists and other anti-fascist groups to face off against a march through the district led by Nazi sympathiser Oswald Mosley and his army of Blackshirts.

Though the police tried to protect the marchers, ultimately the 20,000 protesters won the day, with Mosley and the members of his British Union of Fascists forced to disperse.

The Battle of Cable Street, as it came to be known, has gone down in history as a defining moment – October 4, 1936, was the day the British public stood up and said it would not tolerate the kind of far-right extremism that was engulfing the rest of Europe.

Eighty years later, on the other side of the globe – here in Australia – similar sentiments are being expressed on social media. Against the backdrop of a series of nationalist, anti-immigrant triumphs at the ballot box – in the UK, the US and Europe – homegrown right-wingers One Nation’s Pauline Hanson and Malcolm Roberts have been invited to address the local community in Glen Eira, the heartland of Melbourne’s Jewish community … only this time, the people who have issued the invitation are Jews themselves.

Nonetheless, the reaction has been one of outrage, with calls for the event to be cancelled, or if it is to go ahead, for the speakers to be greeted by an army of protesters clamouring that intolerance will not be tolerated.

Ridiculously, amid questionable allegations that the council had withdrawn permission for the event to go ahead, Roberts accused it of ­anti-Semitism. The claim defies credibility, given the number of Jewish councillors in Glen Eira and the number of Jewish events hosted and supported by the council on a regular basis. It’s hard to imagine that a more pro-Jewish council exists in the country.

The claim equally raised eyebrows given the man who made it. Over the years, in advancing his attacks on climate change science, he has variously discussed an international cabal of bankers who he says are behind what he considers a myth – three of the four banking families mentioned being Jewish and the fourth with a Jewish-sounding name. Alongside this familiar sounding anti-Semitic trope, to support his climate change denial arguments, he has cited infamous Holocaust denier and anti-Semite Eustace Mullins as a primary reference.

True, Roberts has expressed his respect and admiration for Jews, but throw in some of the comments from followers on his Facebook page when he discussed the debacle of the Glen Eira event – “One Nation is being subverted by Jews even before it takes off”, “Are you aware that it was organised Jewry that opened Australia to the third world” – and you gain an insight into the type of supporters he’s attracting.

The party’s image certainly wasn’t helped when fellow One Nation senator Rodney Culleton tastelessly referenced the Holocaust when calling for a parliamentary inquiry into banking, which he claimed would “show that the ANZ bank came in and misled the farmers. In actual fact [the bank] said, ‘Come take a shower’, and gassed them.”

And these are just reasons why Jewish eyebrows are being raised about attitudes towards Jews, never mind the party’s bigotry when it comes to Islam and immigration.

At the time Hanson first surfaced in Parliament, at the time of her re-election and in the light of the past week’s developments, community leaders have roundly denounced the party’s policies. As Australia/Israel & Jewish Affairs Council executive director Colin Rubenstein said in July, “One Nation’s contemptible vilification and demonisation of Islam, Muslims, Asians and other minority groups must be repudiated.”

The AJN likewise expressed its distaste following the recent federal election, stating, “It is unethical and senseless to single out an entire religious or ethnic community, based on a small minority of Muslims being adherents to a radicalised form of Islam. And as Jews, we know what it is like being on the receiving end of such policies in bygone eras.”

Of course, it would be blinkered to deny that there are members of our community who do sympathise with some of Hanson’s policies, and who want to hear her and Roberts speak in Glen Eira. And they are entitled to. We are a free country, and so long as they – and the senators – refrain from racism and incitement, then, as morally objectionable as it may be, there can be no legal objection … providing all the necessary forms are filled in to the council’s satisfaction.

By the same token, however, those of us who do not share those sympathies, who are prepared to stand up to bigotry and defend the rights of minorities, are entitled to protest: to say that while Hanson and Roberts may be speaking in our heartland, the majority of us do not feel they are welcome.