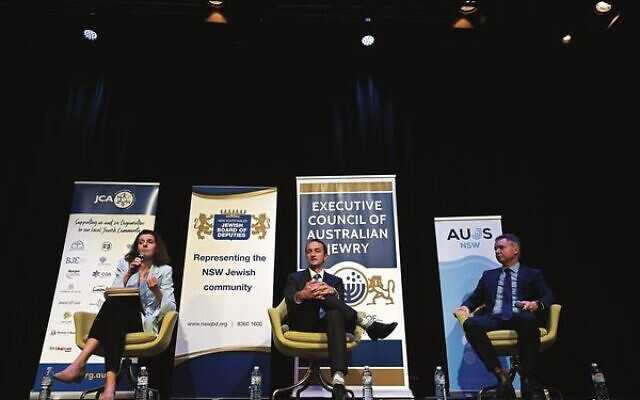 Independent Wentworth candidate Allegra Spender reiterated her support for Israel in light of media controversy surrounding a campaign supporter while incumbent Liberal MP Dave Sharma told the audience his solidarity with the Jewish State was personal at a Jewish community debate on Sunday night.

The forum, which was held at the Moriah College auditorium and co-hosted by the NSW Jewish Board of Deputies, Executive Council of Australian Jewry (ECAJ) and Australasian Union of Jewish Students, also featured Kingsford Smith Labor MP Matt Thistlethwaite. It was moderated by ECAJ co-CEO Peter Wertheim.

Expressing “I don’t just talk the talk, I walk the walk,” Sharma said it was easy to tell a Jewish audience “what they want to hear”.

“When Israel has been under attack with rockets from Gaza, I’ve lived through it,” he said.

“We’ve hidden in bomb shelters. We’ve heard the air raid sirens. I’ve been to see the injured and wounded in hospital. I’ve been to the funerals of some of those killed.

“And when I see these things happen now, I react to it almost viscerally because I know what it’s like. So when Israel came under attack from Hamas in Gaza last year, I defended Israel’s right to defend itself. When antisemitism reared its head earlier in the year in the form of the boycott of the Sydney Festival, I spoke up against it to all major media outlets.”

On communal security, he said there was a “strong case” to expand grants to operational costs such as guards outside synagogues.

“If I’m reelected I’ll continue to be a voice to make sure that we protect the Jewish community properly, but to also look at funding some of these recurrent operational expenses,” he said.

Spender said she has been “a strong friend of Israel and quite literally a friend of many in the Jewish community my entire life”.

“Your connection to Israel is historic and inalienable … I strongly believe in the existence of a strong Israel, which has the right to self-defence,” she said.

Spender said that since announcing her candidacy she had had “the privilege” of meeting rabbis, organisational leaders and the Community Security Group.

“Everyone has a right to practise their faith safely and freely. If elected, I will do everything in my power to strengthen security in schools, preschools, synagogues and all other cultural places in Wentworth,” she said.

Expressing her support for the International Holocaust Remembrance Alliance (IHRA) definition of antisemitism, Spender said she was “very disturbed” at recent student resolutions against Israel that veered into antisemitic territory.

Spender, who is against recognising a Palestinian state, said she is open to negotiating with either major party to form government in a hung parliament, but would not make that issue a condition.

Thistlethwaite was asked whether Labor will recognise a Palestinian state if elected, particularly if influenced by the Greens should Labor rely on them to form government.

“Our policy platform … is to support if we are elected to government, the legitimate right of the people of Israel and Palestine to live behind secure borders, internationally recognised,” he said.

“Labor is aiming to hopefully win this election and govern in our own right. The notion of entering into a coalition with the Greens, and having to listen to them on policy, I think is fanciful.”

He added Labor will promote its adoption of the IHRA definition if elected to government.

The three candidates also discussed a raft of more general election issues including the economy, cost of living, defence and the hot button issue of climate.