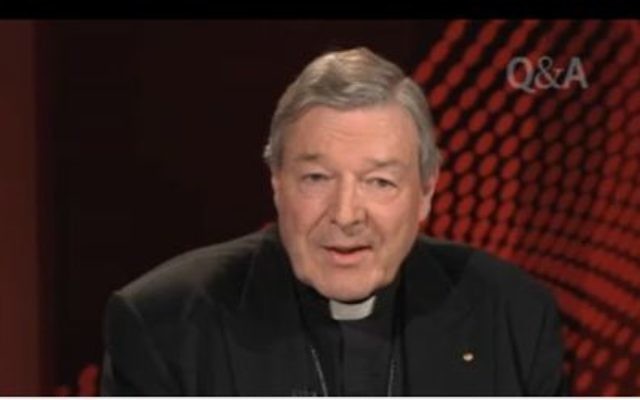 AUSTRALIA’S most senior Catholic clergyman, Cardinal George Pell, has clarified remarks he made on the ABC’s Q&A program, saying he did not mean to offend the Jewish community.

During a wide-ranging discussion on Monday night’s program, Pell – the Archbishop of Sydney – alluded to ancient Jewish people being intellectually inferior to ancient Egyptians and Persians, while also making the extraordinary claim that no people in history had been punished like the Germans.

When asked by host Tony Jones about God revealing himself to the Jews, Pell responded that it was extraordinary they had been chosen as they were not intellectually equal to the Egyptians, Persians or other powers of the time.

“The poor, little Jewish people, they were originally shepherds. They were stuck, they are still stuck, between these great powers,” he said.

“I’ve got a great admiration for the Jews but we don’t need to exaggerate their contribution in their early days.”

Later in the program, while talking about the Holocaust, Pell said “probably no people in history have been punished the way the Germans were”, prompting Jones to put forward the argument that the Jews of Europe suffered more than the Germans.

“Yes, that might be right. Certainly the suffering in both, I mean the Jews, there was no reason why they should suffer,” was Pell’s response

In a statement provided to The AJN on Wednesday, Cardinal Pell sought to qualify his comments on the intellect of Jews in Abrahamic times, saying they were nomads and shepherds, and God made them over time into a great nation.

He further clarified that in his claim about the Germans he was attempting to channel Jewish writer David Berlinski, who said that while God did not conspicuously intervene in the Holocaust, he did “smite their [the Jews’] enemies”.

“My commitment to friendship with the Jewish community, and my esteem for the Jewish faith is a matter of public record, and the last thing I would want to do is give offence to either,” he said.

“This was certainly not my intention, and I am sorry that these points which I tried to make on Q&A on Monday did not come out as I would have preferred in the course of the discussion.”

Executive Council of Australian Jewry (ECAJ) executive director Peter Wertheim said the ECAJ had been in ongoing discussions with Cardinal Pell’s office since expressing serious concern about “some of the statements he made on Q&A, which are deeply problematical from a Jewish perspective” and more generally.

“We welcome as a first step Cardinal Pell’s clarifying statement that he did not intend any offence, and his expression of continuing friendship with the Jewish community and esteem for the Jewish faith,” he said.

“We look forward to the ECAJ’s ongoing dialogue with the cardinal and Catholic bishops to clear up those matters still not completely addressed,” he said.