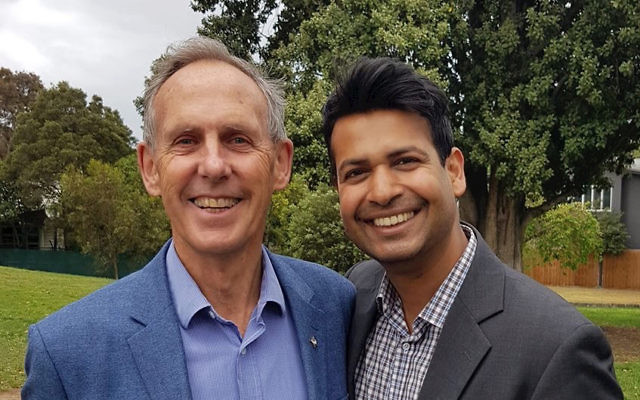 THE Greens candidate for Caulfield has confirmed he will take part in an election debate hosted by The AJN in conjunction with Zionism Victoria.

The public event, to be held at Beth Weizmann on November 14, will see the Labor, Liberal and Greens hopefuls address the community and answer questions put to them.

A similar hustings held prior to the last federal election made headlines after the Greens candidate for Melbourne Ports, Steph Hodgins-May, pulled out of the debate because of Zionism Victoria’s involvement.

However her state counterpart, Dinesh Mathew, says he welcomes the opportunity to engage with the community and debate his rivals for the seat.

Reflecting on the HodginsMay episode, Liberal incumbent David Southwick, who has represented Caulfield since 2010 said, “This should be a great opportunity to hear about the parties’ support for the Jewish community and Israel. I hope the Greens would at least put in an appearance this time.”

He added, “As a proud Jew and long-term local resident, I look forward to another four years supporting our local community and ensuring all Victorians prosper under a future Liberal Government.”

Labor candidate Sorina Grasso was equally enthusiastic about facing off against Southwick and Mathew. “I am looking forward to the debate and I encourage everyone to come and hear the candidates talk about their respective parties’ policies and achievements,” she said.

AJN national editor Zeddy Lawrence, who will act as moderator on the night, said he was delighted Mathew had agreed to take part.

“We believe there were a number of erstwhile Greens supporters within our community who felt they could no longer vote for the party after Hodgins-May withdrew from the debate. At least on this occasion we can hear what the Greens candidate stands for and challenge him on any issues of concern, unlike last time when we were denied that opportunity.”

The Caulfield election debate will commence at 7pm on Wednesday, November 14 at Beth Weizmann.