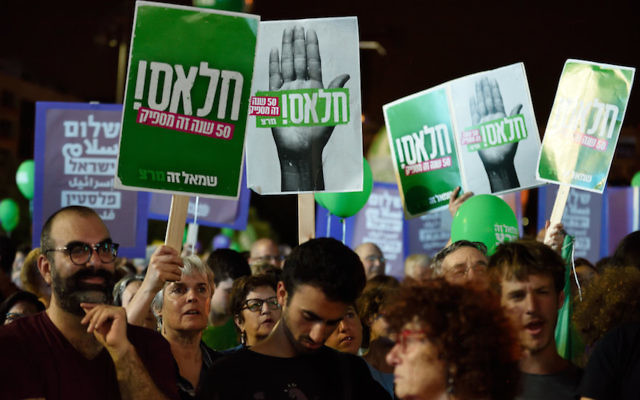 Thousands of Israeli Left wing activists particiapted a rally in Rabin Square, Tel-Aviv, calling for talks with Palestinians and in support of the two states solution on May 27, 2017. Photo by Gili Yaari/Flash90

JUST three days after a concert at the Kotel to mark Yom Yerushalayim, another massive crowd gathered in Tel Aviv to mark the very same occasion. This time, angry speeches took the place of jubilant dancing.

At the Western Wall over Yom Yerushalayim, as the three famous paratroopers of the iconic photograph reunited to loud cheers, as celebratory prayers took place, and as the American singer Yaakov Shwekey belted out religious hits to the dancing and flag-waving crowd, it was easy to imagine that the scene represented the emotion of all of Israel.

Similarly, three days later in Tel Aviv’s Rabin Square, where dissatisfied demonstrators extended as far as the eye could see, all of them drawn to an event billed as a “demonstration against 50 years of occupation,” the atmosphere was so intense that it was easy to think that this was a barometer of how Israelis felt.

At this demonstration, the focus of the half-century since the Six-Day War was not about the reunification of Jerusalem. Avi Buskila, Peace Now’s director general, set the tone, declaring: “Fifty-nine years ago we turned from being a democratic state for the Jewish people to a violent state that rules over another people.”

The reality was that the two events captured how parts of Israel felt on and around Yom Yerushalayim, while many in this complicated country processed a table of sometimes conflicting emotions. Meanwhile, a very large part of the population did not mark the day, which has dwindled in significance for the political centre.

Doron Perez, CEO of Mizrachi which assembled many of those attending the Kotel celebration  declared, “Make no mistake, the miracles of the Six-Day War were the greatest thing to happen to the Jewish people since the time of Chanukah, if not the splitting of the Red Sea.”

At Rabin square, demonstrators and speakers couldn’t have had a more different take on the anniversary.

“The reality on the ground is that Jerusalem is not really unified and there’s nothing to celebrate in the lives of most people here,” Jessica Montell, executive director of the organisation Save Israel, Stop the Occupation claimed in an interview with The AJN, arguing that Palestinians face injustice from Israel and Jewish residents face terror.

Montell claimed: “Any celebration of 1967 is bittersweet given that the legacy of this war constitutes a threat to the future of Israel as a Jewish democratic state.” Her rationale is that Israel’s control of areas captured in 1967 threatens to undermine the state’s Jewish majority.

Zehava Galon, the leader of the Meretz party, was cheered loudly during her speech, and had to pause when the crowd got so carried away with her message that it started cheering “Bibi go home.” The half- century that Israel has controlled its 1967 gains without a peace deal is “50 years too many,” she said.

Galon’s main message was, “The occupation is choking us.”

Another speaker, Charedi journalist Eli Bitan, said: “As the right celebrates 50 years on the deck of the Titanic, we must shine a light on the occupation and say, without fear: these have been 50 years too many.”

On Sunday, the government marked Yom Yerushalayim by holding its weekly cabinet meeting in the Western Wall tunnels. Prime Minister Benjamin Netanyahu stressed the historic location, saying that he was sitting close to where the First and Second Temples had stood. “Thousands of years have passed and the Jewish people have returned to their land,” he said.

Earlier in the week, he declared, “We will not go back to a situation in which we can look at the Western Wall, but cannot approach it.

“There are those who see the Six-Day War as a disaster for Israel. I see it as a miracle and a salvation for Israel.”

Appealing for unity, he said,“As we mark a half-century since the city was reunited, I believe the time has come to bring peace to Jerusalem. To grow within her an Israeli hope, a hope for Jerusalem: the city which welcomes pilgrims from all communities, from all over the world. This is our duty now more than ever. To work to develop and preserve our city.

“On Yom Yerushalayim, I ask you all, to take from the strength of Jerusalem, from the history of Jerusalem from the beauty of Jerusalem, so that we will know how to build our futures together. It is not enough that the city is united, if its people are still divided.”