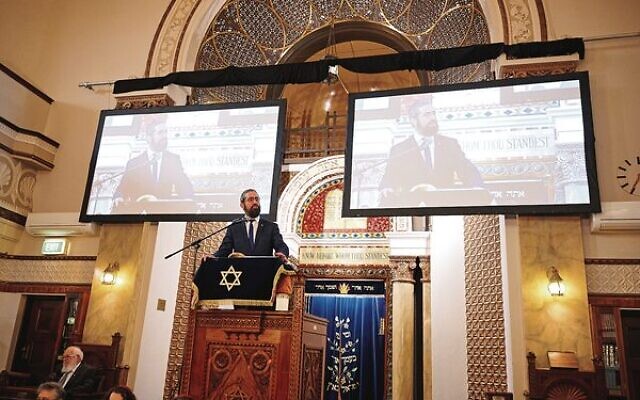 Senior Rabbi Yaakov Glasman gave the keynote speech, expressing “a hearty and heartfelt Mazal Tov” on behalf of himself and Rebbetzin Sara Glasman.

Among those invited to speak were immediate past president Anton Bloch and vice-president Janice Iloni-Furstenberg, while Chief Rabbi of the Commonwealth Rabbi Ephraim Mirvis gave a message via a video.

Governor the Honourable Linda Dessau was unable to attend due to contracting COVID-19, however she shared a message of congratulations saying, “It is an afternoon to celebrate the resilience of this community across many decades.

“It is most certainly an occasion to celebrate the contribution of individuals and families to the St Kilda Hebrew Congregation, and in turn, the congregation’s contribution to the rich diversity of Victoria’s wider community.”

President Gerry Bullon, who addressed the event and officially launched the 150th anniversary commemorative book Stories of our Spiritual Sanctuary, said he feels privileged to lead St Kilda Shule at this time in its history.

“After the disappointment of two previous cancellations due to COVID, the excitement in the shule was palpable. The joy and camaraderie among the congregants and visitors was a pleasure to behold,” he told The AJN.

Reflecting on the event and milestone, Rabbi Glasman shared, “I pinch myself every day when realising that my being part of this shule is not a dream, it’s my reality.

“To all our member families and individuals, you are the reason we exist as a shule – the rest is just commentary. Although Rebbetzin Sara’s and my tenure with you has only been a very short 10 and a half years, we cannot wait to continue this journey with you for many more years to come.”