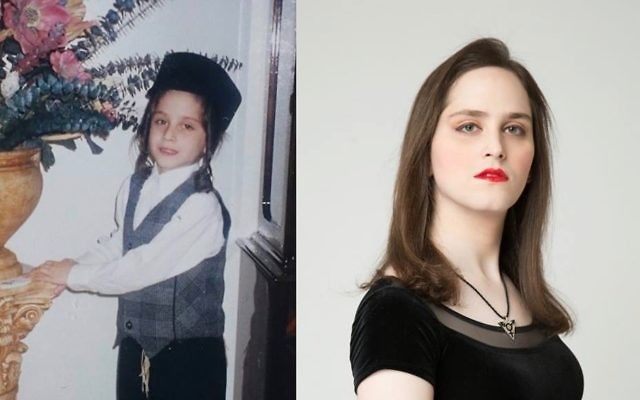 Abby Stein is visiting Australia for a series of speaking engagements this month. Photo: Facebook

Abby Stein is the first openly transgender woman raised in a Chassidic community. She shares her journey with Rebecca Davis.

ABBY Stein is ebullient. As the bubbly 27-year-old speaks from her home in New York, she does so with sharpness, positivity, sass and humour that is dry. She is a regular girl – whatever that means. She loves shopping for dresses, and adores make-up for the creativity she can express.

But Abby’s story is different.

Abby was born as Yisroel.

Living in the Charedi stronghold of Williamsburg, Brooklyn, Abby’s family is a part of the Vizhnitz community – and so was she for the first 20 years of her life. Her family are particularly respected as direct descendants of the Baal Shem Tov, the revered mystical rabbi from Poland (circa 1700) who is regarded as the founder of Chassidic Judaism.

The Stein family adhere to the fierce observance of ultra-Orthodoxy. Abby’s education revolved around religious texts – secular education was almost non-existent – Yiddish was the first and dominant language spoken, and all books, movies and music were strictly moderated.

Yet in this world of stringent boundaries Abby recalls a profound uncomfortability in her identity – since she was three years old.

“I started realising that everyone treats me like a boy and I couldn’t understand why.

“Why does everyone see me as a boy?”

From that moment and spanning throughout her childhood and teen years, Abby pivoted in her mind from wanting to do something about her feelings, to telling herself to let it go, it was “impossible”.

She was bereft of the tools, vocabulary and language required to even remotely describe or understand her inner turmoil, and was isolated from the knowledge and support to address it.

And within the parameters of such a heavily cloistered community, where the idea of homosexuality is almost unknown, the concept of gender identity is completely unheard of, tells Abby.

Unable to suppress her natural inclinations, Abby found herself drawn to whatever she perceived to be feminine.

“I think throughout my life, it was almost like whatever my brain subconsciously registered as being girly, being feminine, I would start liking that.”

And then when Abby was seven she stumbled across an article about organ transplants in the newspaper. She was captivated, and began collecting any newspaper clippings on the topic.

“In my mind, I thought that eventually I’m going to do a full body transplant. I’m going to figure out a way to transform every part of my body into a girl.”

In her quest to realise that dream she first turned to what she knew best – religion.

“I wrote a prayer that I would say every night before I went to bed that I just want to wake up as a girl.”

Graced with a strong imagination, Abby also created a fantasy of a girl boot camp, to where she would be whisked away and “taught how to be the perfect girl”.

But devout prayer and daydreams were only able to sustain Abby for so long, and by the age of 12, she began to question God, religion, and increasingly, her own identity.

Abby eventually met a rabbi who was dedicated to the study of kabbalah. He introduced her to the ancient Jewish mysticism and it resonated.

“Gender is quite fluid in kabbalah. And there’s a lot of talk of people being in different bodies than where they’re supposed to be,” she shares.

The strong tide of the Vizhnitz tradition swept Abby along as she stayed on the pre-determined path taken by so many before her. She underwent shidduch, married by the age of 18 and began her rabbinical studies.

“Not a lot of people are ordained as a rabbi by 20,” tells Abby, “but I did that because it was a way of forgetting about everything else, by immersing myself in that, all the way.

“And the other part of it was, I always felt that if I’m going to rebel against something, I want to know exactly what it is that I’m rebelling against!” she says with a laugh.

While Abby wrestled with living life in the gender ascribed to her, it was the arrival of her son, in the year following her marriage that was “my final punchline”.

“The idea of gender was punching me in the face,” she says.

“I think it was one thing for me in trying to deal with my own identity, my own struggles and trying to suppress what I felt – which sometimes worked, and sometimes didn’t.”

Abby remembers the usual excited speculation leading into her child’s birth; was the baby going to be a boy? Was she going to be a girl?

“And it made me think, no one takes into account if the baby will be physically one gender, but identify as another.

“Having to face that, in a big way, was what ended up weighing down on me even more.”

In January 2012, Abby used her phone on Shabbat for the first time.

She soon joined Footsteps, the New York-based organisation dedicated to assisting those who wish to leave ultra- Orthodoxy. Later that year, Abby divorced her wife, and finally left the community.

“When I left the community, it was very much that I didn’t believe in it. It was a theological and a philosophical decision,” tells Abby.

Abby only then discovered that other transgender people existed when she went online for the first time at the age of 20.

“The first thing that I googled was if a boy can turn into a girl,” she recalls.

Abby completed her high school diploma and in 2014 began her college education at Columbia.

Although she may have run from the Charedi community, she could not run from her ever-growing feelings of unease within.

In 2015, Abby started taking hormones to begin her transition. A few months later, she came out as a trans woman.

“It is amazing to be a woman. First and foremost, I see the world in a new way. The world seems to smile on me a lot more now,” Abby reflects.

This wasn’t always the case. Abby remembers how she used to suffer badly with depression and anxiety before she transitioned.

“But, I haven’t had a single issue with depression since. Mood swings? Oh yes, all the time!” she jokes.

When it comes to sexual attraction, Abby makes the distinction that sexuality and gender identity “have nothing to do with each other”.

She identifies as demi-sexual, “feeling attraction to personality, not just the physical,” and has dated both men and women.

The moment when Abby was first outwardly perceived as a woman was poignant.

It was a few months into the hormone therapy. Suddenly struck by severe stomach pains one evening, Abby got herself to the nearest emergency room. The nurse began to reel off questions in order to admit her.

“Then she asked when was my last menstrual cycle,” says Abby.

“And on one hand, I remember that I was feeling this terrible pain, but on the other, I felt, Yes!!!!” Abby exclaims.

“It’s that feeling of being seen. You’ve seen me for who I really am, and that is beautiful.”

As Abby discovered her new identity, she also discovered a love for fashion and make-up.

“For me it’s a form of art. I love expressing myself, but I think that ultimately, the biggest and most rewarding part, is that feel- ing of walking down the street and feeling like I am myself.

“That feeling of being seen as a woman. And it’s not because you need other people’s permission. It’s a way of feeling comfortable in your own body that is beautiful and getting to explore that, and getting to know that.” 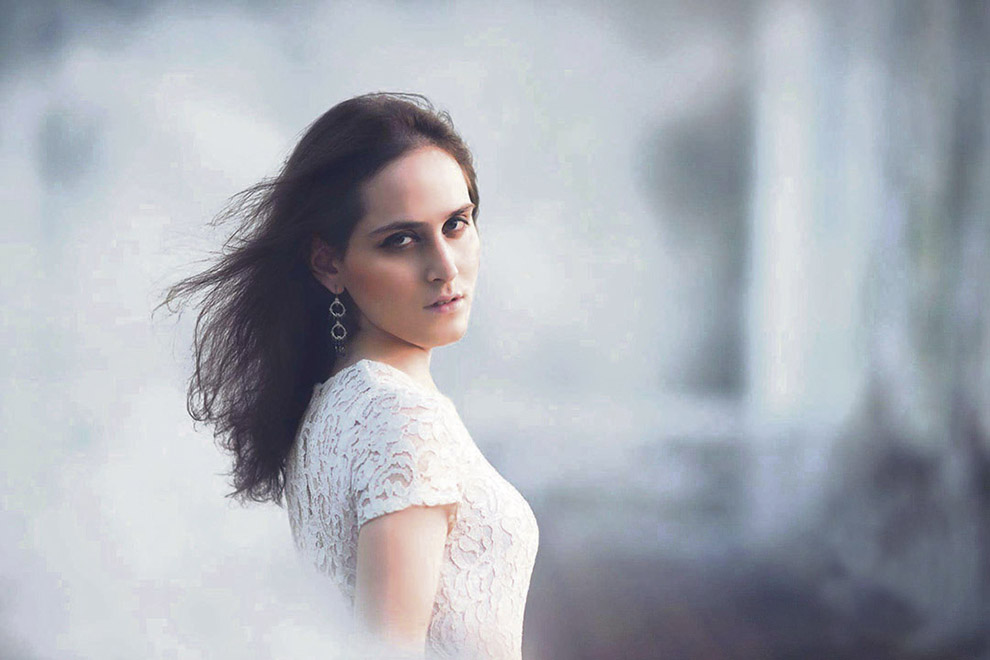 Abby has also found new meaning in her Jewishness. For the first few years after leaving Williamsburg, she felt angry towards Judaism and had no relationship with it, but she eventually began re-exploring her connection.

“Not many people can say they have had a bar mitzvah and a bat mitzvah!” she tells. Abby muses on the queer characters of the Tanach, and the multiple genders discussed in the Talmud.

“Our ability to be queer and Jewish is not a contradiction. They enhance and enrich each other.

“To me, Judaism is not about a belief. From a cultural perspective I really relate to it. I’m really, really proud of it and there is a lot in Judaism that speaks to me – and a lot that doesn’t. And that was also a journey for me.”

While there is much to celebrate about Abby’s journey, it is an unfortunate reality that her parents were never able to accept her transition. She describes their relationship as “non-existent”.

Despite Abby’s father telling her that he would never be able to talk to her again after her transition, she still calls him in the hope that he will one day change his mind.

“I’m literally the first Chassidic trans person ever in history. That was big. My father wasn’t able to deal with it, not just for himself, but also in the face of the community.”

Indeed, the community’s response to transgender identity – within ultra- Orthodoxy, segments of the wider Jewish community and other cloistered religious groups – is what has kept Abby determined to break down barriers and phobias and speak her truth.

Today Abby is a writer, speaker and activist dedicated to raising awareness for trans rights and support for those leaving ultra-Orthodoxy.

“My motto over the past year has been about moving from tolerance to celebration,” she says.

“It’s a big step that we as the Jewish community, and the world as a whole, has to move on when we think about LGBTQI people. Because accepting and tolerating queer people is not okay. We have to celebrate them, and realise that there is a joy and a happiness in every human’s life.

“Oh, and can you tell me the name of the lipstick you are wearing in your WhatsApp profile pic? I love it!”

Abby Stein will be addressing the Jewish LGBT+ World Conference which will be held in Sydney from March 21-24. Tickets: bit.ly/2TBEJk2

Abby will also be speaking at a public event for Pathways in Melbourne on Monday March 25 at 7.30pm. Tickets: bit.ly/2EVikpI