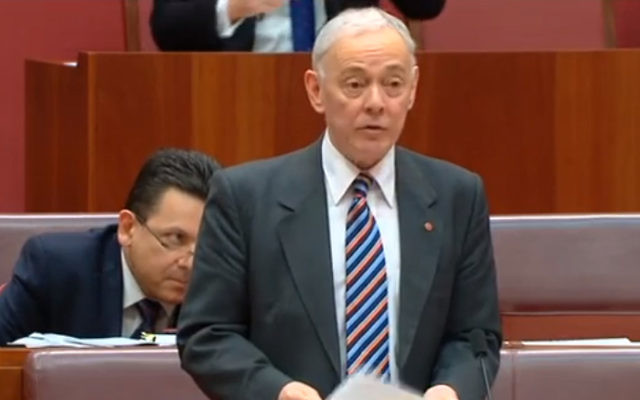 THE federal government will look into the feasibility of a free trade deal between Australia and Israel, Trade and Investment Minister Andrew Robb’s office has confirmed to The AJN.

It was also announced – at an Australia-Israel Chamber of Commerce (AICC) luncheon featuring Hasson and Assistant Minister for Innovation Wyatt Roy – that the Prime Minister’s wife, Lucy Turnbull, will lead a women’s trade delegation to Israel next year.

This is in addition to a planned delegation with NSW Premier Mike Baird, and a visit by Minister for Industry, Innovation and Science Christopher Pyne and Attorney-General George Brandis this month.

Senator Day said he looked forward to a feasibility study into a free trade deal being completed within the next six months. “Israel outranks Australia on the Bloomberg Global Innovation Index. We have free trade agreements with the countries occupying first (Japan), second (South Korea) and sixth (USA) places,” he said.

“Israel has an outstanding record for tech start-ups and innovation … my home state of South Australia knows very well how innovative Israel is. We adopted their drip irrigation technology decades ago.”

Turnbull said she was delighted to join AICC NSW chairperson Jillian Segal in leading the trade mission. “Israel is widely regarded as one of the world’s most successful start-up economies,” she said. “The mission will be a fantastic opportunity for our women leaders to exchange ideas with Israeli businesses, be inspired by Israel’s buzzing start-up culture and also, to be reminded of the innovation potential of Australian businesses and communities.”

AICC NSW CEO Charles Nightingale said Turnbull “is extremely well respected across all facets of industry, education, politics and is just the perfect person to lead a mission”.

He added that a free trade agreement would be a “wonderful thing”.

“Any obstacles that can be withdrawn to improve the relationship that the countries have with each other is obviously of benefit,” he said.

Australia’s Ambassador to Israel, Dave Sharma, said the timing of Hasson’s visit could not have been better. “The Australian government is gearing up to deliver a major Innovation Statement later this month, and the question of how to make the Australian economy more innovative and competitive is a live policy debate right now,” he said.