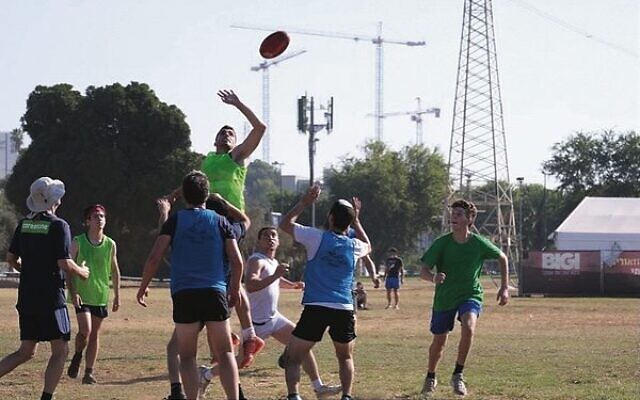 MORE than 50 Australians living in Israel got in the Grand Final spirit last week, joining in the fun of an Aussie Rules footy match in Tel Aviv, hosted by the Australian Embassy.

After the September 17 game at Hayarkon Park, participants tucked into some well-deserved meat pies and Jaffa oranges.

The Tel Aviv Cheetahs, an Australian Rules football club in the Tel Aviv-Yafo area, which has also been involved in the decade-long legacy of the Peace Project, bringing Israelis and Palestinians together in football matches, posted excitedly ahead of the expat game, telling followers to expect some “good Aussie vibes”.

The Australian Embassy joined with the Cheetahs to organise the AFL football tournament, inviting footy fans to “Come down and say g’day or have a kick”.

Ambassador to Israel Paul Griffiths told The AJN, “I was really happy with the day. It was excellent to see so many Australians and Israelis, players and supporters, enthusiastic about Aussie Rules. The game was played in good spirits, with a high level of skill on display. People clearly love having a kick of the footy, particularly in Grand Final week! The AFL day was a great success for our OZraeli campaign to bring people in Israel who have a background or interest in Australia together.”