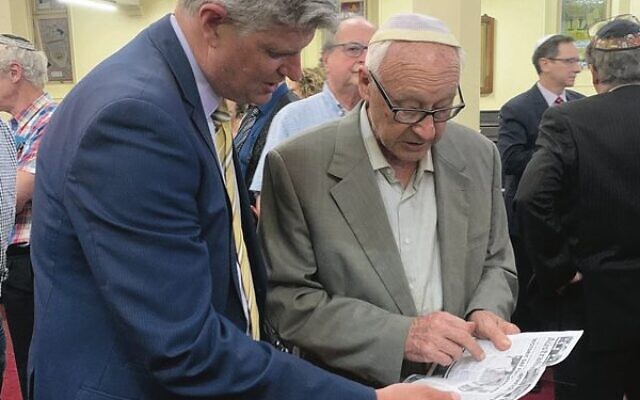 Queensland Jewish Board of Deputies president Jason Steinberg says the community has “lost a true legend” after George Stein passed away at the age of 95.

The Holocaust survivor was an icon of Brisbane’s Jewish community, who Steinberg said became a “champion and hero” from the moment he arrived in the 1950s.

“His work with the State Zionist Council, Board of Deputies and many other organisations established strong ties with Israel and Shoah remembrance,” Steinberg said.

“George also played a major role with the South Brisbane Hebrew Congregation as president, lay leader and artisan – helping to build the current shule in the 1970s.

“But most of all, George’s commanding stature as a Holocaust survivor and his dedication to ‘never forget’ will be his enduring legacy.”

“George was one of Queensland’s few remaining survivors and was dedicated to ensuring that people would ‘never forget’ the atrocities of the Holocaust,” Miles said.

“Over decades, George worked tirelessly to communicate this with government, schools and community groups across the state.

“George devoted his life to his community and to empowering people to stand up against prejudice and hatred.”

Stein was born in Romania in 1927 and grew up in Oradea, where his father was president of the synagogue.

In 1943 the family was transported to Auschwitz. It was the last time he saw his parents and sister.

Stein was separated in the line and sent to Dora labour camp in Nordhausen, Germany. After Dora was destroyed by Allied forces, Stein was sent to Bergen-Belsen, before being liberated.

He and wife Gertrude (Trude) emigrated to Australia in 1955.

Stein’s family said he never got over Gertrude’s death in 2006 and over the last two years his own health began to deteriorate.

“Trude was dad’s rock,” they said. “They had over 60 years together.

“Dad taught us to never give up and that good always overcomes adversity.

“His greatest desire was to give to the Jewish community and to educate future generations, including his children and grandchildren, about the Shoah and the love of family.”

Son Michael said, “A perfect example was my brother Frank who rose to be head of Betar Australia, youth leader for Hineni at the central Synagogue and an Australian representative for the Zionist Federation in Jerusalem before his death in 2009.”

The family concluded, “Dad never said no and was the hardest worker anyone met. He had a very strong will, was very strong on morals, honesty and truth and those were handed down to the family.”