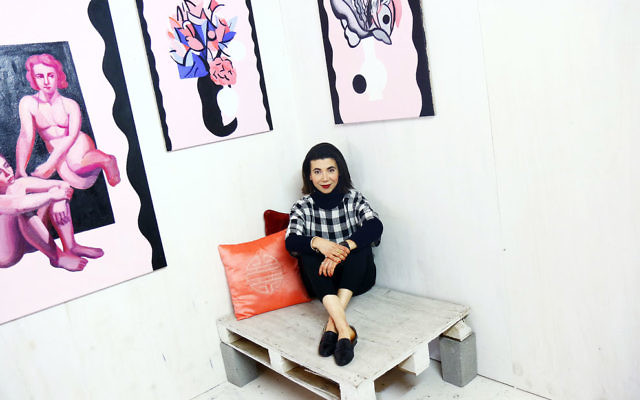 ARTIST Yvette Coppersmith, one of the 51 finalists in this year’s $100,000 Archibald Prize, drew on the influence of popular actress Rose Byrne for her entry, an oil on linen painting titled Rose Burn self-portrait.

“The way I work – like many artists – is that I have a lot of canvases on rotation in my studio, and eventually they will all be finished, so I’m not exactly sure when I started on this painting for the Archibald, which was completed in April,” says Coppersmith.

“I used to paint to a plan and knew how the painting would look at the end, but now I’ll just start a painting and see where it leads. It can go through many stages and layers.”

Coppersmith, 36, who works from her studio in Caulfield, said that while the painting Rose Burn self-portrait was in progress she found a photo of actress Rose Byrne in her files that she had always admired.

“Rose had short hair in the photo – I looked at it and my shoulder-length hair and thought I needed to cut it,” she says.

“I wanted to fashion my hairstyle in a similar way to hers and gave myself a haircut – it reinvigorated the direction of the painting.”

Coppersmith says the title of her painting is a play on words: “Rose and Burn say colour and action as well as being a person.”

She adds: “A self-portrait is like a diary. I can see a lot more in the painting than other people can. It has its power in its enigma.”

The 2016 Archibald Prize was won by Louise Hearman for her portrait of entertainer Barry Humphries titled Barry.

Coppersmith won the inaugural Metro 5 Art Prize in 2003 and tries to enter the Archibald Prize each year – she was a finalist in 2009 with a work featuring John Safran – and is also a regular entrant in the Doug Moran National Portrait Prize.

“Sometimes I enter a portrait that is really conservative and traditional, and other times it is a bit more way out,” she says.

“Art prizes are just one facet of an artist’s practice. Entering in them is as much about bringing joy to your collectors and the subjects that you are painting. Because the Archibald is so well known in this country, it has got a certain buzz surrounding it.”

“I’m thankful that I have so many other opportunities to work on that I’m not reliant on winning a prize to put me on the map. But just being a finalist, being acknowledged ­nationally, is a wonderful boost. Competitions are also great marketing for an artist to reach a wider ­audience.”

In May, Coppersmith spent three weeks as artist in residence at Geelong Grammar School in Corio, setting up her studio in the art department and being accessible to students and staff.

“I spoke about my work to every art class from grade 6 to year 12 and students could come and talk to me in my studio. It was a lovely experience and I found it rewarding working with young people. When I was a student, people would come into your life who could be life-changing and connect you with your own dreams.”

The works by all Archibald Prize finalists are currently on display at the Art Gallery of New South Wales and will later tour galleries in regional NSW and Victoria.