The idea behind That Jewish Family is simple – education.

Raizel and Dani Namdar, together with their young son (and now, their newborn), just want to share their everyday life with the world living as Chassidic Jews. And they always do it with a smile.

The Namdar family travel the world, sharing their lives with their followers on social media– more than 100,000 on Instagram, just over 50,000 on TikTok and just under 20,000 on YouTube – and the numbers keep growing.

They’ve recently touched back down in Australia – where Raizel grew up – to expand their family, giving birth to another little boy. And while they don’t know what their future plans are, another addition isn’t going to stop their nomadic life. 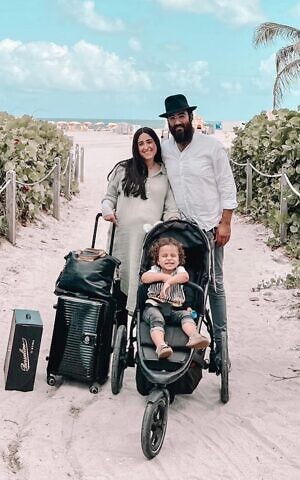 The year before he got married to Raizel, Dani started making videos in Swedish, explaining that there was nothing really out there that showed how he lived as a Chassidic Jew.

“Forget about these beautiful insights, there’s nothing out there that actually shows how we live, except for Netflix, and a lot of newspaper articles online which you will find, it’s a lot of defensive responses from the religious community,” Dani explained. “There’s no voice really showing how we live …”

“There’s no genuine insight, without an agenda,” Raizel added, before saying education is key, especially in this day and age. “I think with the whole antisemitism and anti-people in general, a lot of it is based on [lack of] education. If people understood each other and if people knew why we all live the way we live, and had an understanding and respect, then there would be a lot more love.”

The Namdars believe that education and respect will come from seeing their genuine and pure way of life.

While on their That Jewish Family social platforms, Raizel and Dani explain the holy days – what happens and why Jews celebrate them. They also show what makes a Jewish preschool different to a non-Jewish one, how and why observant Jews check and wash their fresh produce before eating (to check for insects, which are not kosher), why observant Jews can’t use electricity on Shabbat, what makes a dress modest and how they manage to be Chassidic Jews while living a nomadic life.

“It’s a very open space,” Dani explained. “We have a policy, we never delete a comment, it’s real free speech. People can express themselves, and we have a voice, so we can respond to them.”

Even the antisemitic comments aren’t removed and that’s a conscious decision. While they often receive messages saying they should delete the hateful comments, Raizel and Dani say it’s important that others see the hate and realise it’s there. Then, they turn those hateful comments or questions around and answer them honestly in their videos. “People aren’t only watching the content, they’re reading the comments,” Raizel said. “If someone has an issue with something that is said, a public comment, then we have the ability to publicly respond and show up.”

What they find really amazing and beautiful is that they are often told by a new follower or someone they meet on the street that their videos changed their perception of Chassidic Jews.

“We’ve had people write that they were antisemitic, up until they saw our videos. And that’s something that really touches us because we can save lives like this,” Dani said. “These are really hateful people who said they hated Jews with a passion. And they tell us that now they can’t.”

A lot of the time, Raizel clarified, these people have never even met Jews, especially Chassidic ones. They’re basing their opinions on television shows like Unorthodox or reality show My Unorthodox Life, or articles they read in the newspaper, rather than doing their own research.

That Jewish Family makes the information more accessible and easier to digest, because it’s all personal stories. Plus, the Namdars are having a load of fun while travelling the world and sharing their story – from how they met to introducing their toddler to their newborn.

Importantly, while their videos are fun and filled with laughter, they’re also very informative. Like the video of how they first met. While many non-Jews and even non-observant Jews would assume the two met via a shidduch, the couple explain that at the end of the day, it was their choice whether or not to date each other. Raizel even broke off the engagement at one point. While it’s a lovely video, the most important thing about it is that viewers are given insight into how Raizel and Dani in particular met, but also, contradicts the common assumption that Chassidic Jews don’t have a say in who they marry.

And every story is shared with a smile, and their lovable sense of humour – Dani even jokes in one video that the reason they choose their nomadic life is because he doesn’t want to clean for Pesach.

For Dani and Raizel, the success of their channel is the authenticity. They’re not trying to change the world, but they are trying to change people’s perceptions, in a genuine, heartfelt way, with thoughtfulness, cheekiness and a little bit of faith.