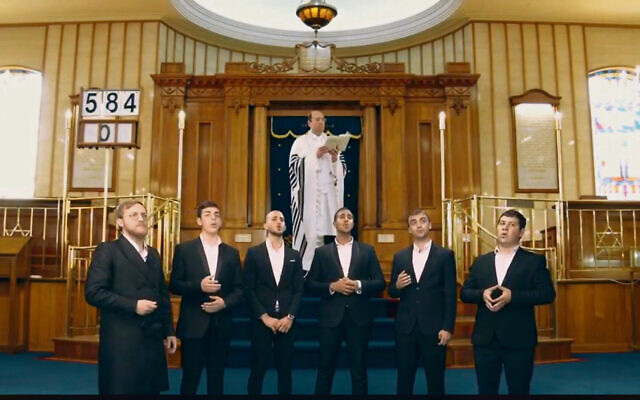 With the approach of the Yamim Noraim of 5783/2022, the first time we will have services back to normal post-COVID shule restrictions and closures, all shule-goers are looking forward to hearing the familiar sounds of chazanut in each and every shule that they are used to attending.

However, Melbourne Jewry in particular is looking forward to a taste of imported chazanut. Services at Toorak Shule will feature broadway star Dudu Fisher. Rabbi/Chazan Dovid Rubinfeld is returning to Melbourne to lead services at Elwood Talmud Torah Congregation (where a history of chazanut goes back to the time of Chazan Avraham Adler whose memorable famed abilities introduced this writer to the beauties and nuances of chazanut).

Services aside there will be opportunities for the community to attend various non-chag day concerts including a Kolot min Hashamayim concert on October 1.

As I write, more such concerts have yet to be announced. (Note: The Lemmer Brothers concert using Toorak Shule as a venue in September is not specifically chazanut.)

In his article available online entitled “The origins of chazanut”, Rabbi Geoffrey Shisler points out that “since its beginnings chazanut has constantly changed in character. Indeed it has needed to if it was to fulfil its function of being the means by which to inspire congregants.”

Nevertheless even today chazanim maintain “ancient prayer modes that have become hallowed by time and usage”.

Rabbi Shisler writes, “The function of the chazan today is twofold. Firstly he is to keep the congregation together and secondly he is to try to inspire them towards a higher level of spirituality during prayer … [And] it is still absolutely imperative that whoever does conduct the service, must be completely familiar with all the traditional niggunim that have been handed down from one generation to another.”

“What are the elements of chazanut that are still popular and of importance today?” Rabbi Shisler asks. “One of the most important elements of chazanut is called ‘nusach hatefillah’. This expression has two meanings. One is the form and order of prayers [subject to some variation between shules dependent on the origins and customs of their founders and members], and the other refers to the traditional melodies that must be used to chant them. It is this second one that is specific to chazanut.”

The period between the wars is generally regarded as the “golden age of chazanut”. This is the time when legendary chazanim such as Kwartin, Sirota, Hershman and Rosenblatt flourished.

Post-war years saw a continuation of their tradition through such famed chazanim as Moshe Koussevitzky and Pierre Pinchik. Contemporary chazanim will often utilise their signature compositions, but the traditional nusach must maintain its place.

Beyond chazanut per se, the late Rabbi Lord Jonathan Sacks reflected on the place of song in Judaism. He posited that there is an inner connection between music and the spirit; that “when language aspires to the transcendent and the soul longs to break free of the gravitational pull of the earth, it modulates into song.” He cited Goethe who said: “Religious worship cannot do without music. It is one of the foremost means to work upon man with an effect of marvel.”

On a different level, Rabbi Sacks noted, “Mystics go further and speak of the song of the universe … This is what Psalm 19 (2-3) means when it says, ‘The heavens declare the glory of God; the skies proclaim the work of His hands …There is no speech, there are no words, where their voice is not heard. Their music carries throughout the earth, their words to the end of the world.’

“Beneath the silence, audible only to the inner ear, creation sings to its Creator. So, when we pray, we do not read: we sing. When we engage with sacred texts, we do not recite: we chant. Every text and every time has, in Judaism, its own specific melody. There are different tunes for shacharit, minchah and maariv, the morning, afternoon and evening prayers. There are different melodies and moods for the prayers for a weekday, Shabbat, the three pilgrimage festivals, Pesach, Shavuot and Succot (which have much musically in common but also tunes distinctive to each), and for the Yamim Noraim, Rosh Hashanah and Yom Kippur.”

Rabbi Sacks continues, “Music has extraordinary power to evoke emotion. The Kol Nidrei prayer with which Yom Kippur begins is not really a prayer at all. It is a dry legal formula for the annulment of vows. There can be little doubt that it is its ancient, haunting melody that has given it its hold over the Jewish imagination. It is hard to hear those notes and not feel that you are in the presence of God on the Day of Judgement, standing in the company of Jews of all places and times as they plead with heaven for forgiveness. It is the holy of holies of the Jewish soul.”

Yossi Aron OAM is The AJN’s religious affairs editor. He has spent over 40 years as chazan of South Caulfield Hebrew Congregation.