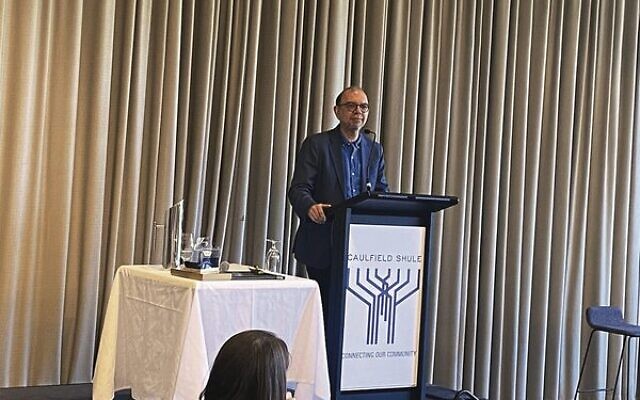 REFLECTING on his 14 years at Caulfield Hebrew Congregation (CHC), Rabbi Ralph Genende, its former senior rabbi, said he has realised his goal to “help shape and change this Orthodox community of ours, to move Caulfield Shule from, as you’ve heard, a fractured and fractious place, to one of energy and one of empathy … crossing the generations and reaching out to people of different stations, to help it recognise and realise its space as a centre of inclusive and enlightened modern Orthodoxy, a progressive voice of change and social action”.

The rabbi noted one of his most satisfying achievements was bringing youth volunteers Hineni to Caulfield Shule. “How fortunate I’ve been to be able to facilitate the move of Hineni, a progressive, modern Orthodox movement.”

Incoming shule president Howard Zeimer recounted that after debilitating rifts at Caulfield in the early 2000s, Rabbi Genende was recruited from Mount Scopus Memorial College because “membership had declined dramatically and we were searching for a pathway to recovery … our fractured community was in need of healing”.

Professor Frank Oberklajd, a congregant, recalled Rabbi Genende’s arrival in 2006, as “a new progressive rabbi who was making a difference … and we got more than we bargained for”.

He credited him with tikkun olam, “promoting this translation of Jewish values, caring enough and brave enough to advocate for social justice. And that hasn’t been popular with everybody. He’s taken quite a battering at times.”

Describing her childhood rabbis as “men in black, revered yet remote”, congregant Leah Justin had been intrigued by the young rabbi “not known as Rabbi Genende but simply Rabbi Ralph”, who would advocate for agunot, asylum seekers and Indigenous communities.

Describing himself as “a practical dreamer” who in his birthplace of South Africa had surprised his father with his decision to study for the rabbinate, Rabbi Genende told guests, “I know I’ve changed Caulfield Shule, but Caulfield Shule has also changed me.”