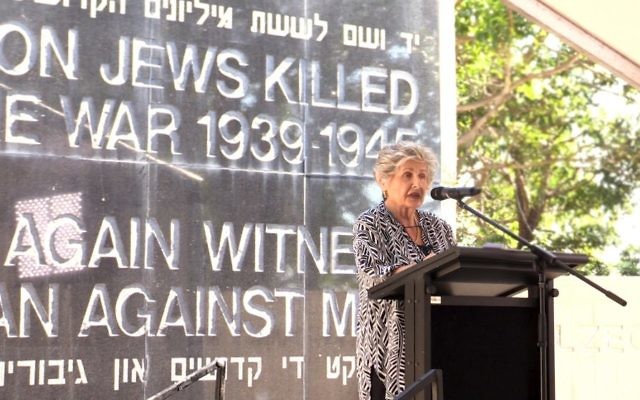 Litzi Lemberg speaking about her experience as a child survivor of the Holocaust.

WHILE there are many thought-provoking portrayals of the Shoah, Last Witnesses, a documentary set to screen on ABC TV’s Compass program this weekend, sets itself apart from other Holocaust films with its moving message that bears strong relevance to youth today.

“We tried to make it not so much about the Holocaust but about what is happening now and the fact that all these people … speak to school kids,” commented Judy Menczel, the producer and director of Last Witnesses. “They want to give back to children.”

Menczel has produced a number of Holocaust films, but this one has special resonance for her personally. “These people can actually speak about their experiences whereas my mother was in Auschwitz … she finds it very difficult to discuss it,” remarked Menczel.

Drawing on their experience from one of the darkest episodes in human history, survivors are helping Australian children through programs run by the Sydney Jewish Museum, Courage to Care and the Moving Forward Together Association.

Together these inspiring individuals promote a message of tolerance and highlight the power of single souls to make a meaningful impact amid a prevailing tide of indifference.

Rescued by a German soldier as a child, Friedlander now builds bridges between communities and promotes cooperation and respect through his position as founder and president of the Moving Forward Together Association.

According to Kwiet, the main function of a Holocaust educator is to “train young people from different backgrounds to develop empathy and to stand up when it comes to current defamation”.

Valent, a psychiatrist, author and founder of Child Survivors of the Holocaust, Melbourne, said that from a psychological perspective, “child survivors were the last to be discovered and it was a difficult concept that children were actually survivors, because until then even their parents told them, ‘what would you know, we are the survivors’. And they didn’t want to hear their children’s experience and the children didn’t want to tell their parents what they’d suffered”.

Fortunately, as Menczel’s documentary depicts, support groups enable child survivors to express their trauma in a safe space. For Lemberg, who only discovered at 46 that she had been a child survivor, participating in the Child Survivors of the Holocaust group in Sydney, of which she is now the chairperson, was a particularly healing process.

Edited by Michael Amoroso and co-produced and co-directed by Paul Green, the film also features scenes from one of Menczel’s previous productions, Courage of Strangers, which documents the work of Courage to Care, an organisation that strives to combat discrimination.

Last Witnesses “is a sort of local pocket of hope … people opening up and being so honest about what happened to them as young people,” reflected Menczel.

“That’s why I think these people are heroes, all of them. They have fed back so much to our community.”