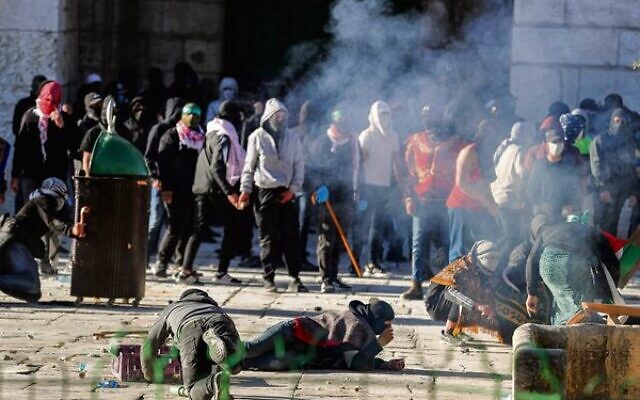 The UN Security Council convened an emergency closed-door session as unrest in Jerusalem escalated this week.

Tensions in the region have spiralled, with several days of intense clashes between Palestinian rioters and Israeli police on the Temple Mount sparking fears that a wider conflagration could be ignited.

In a statement released after the closed-door meeting, UN’s Mideast envoy Tor Wennesland avoided casting blame on either side and instead focused on expressing his concerns over the escalation while calling on leaders to take steps to reduce tensions and avoid further provocations.

On Monday evening, violence threatened to ramp up further, as Israeli communities near the Gaza border came under rocket attack from a Palestinian enclave, with the projectile intercepted by the Iron Dome defence system.

Foreign Minister Yair Lapid cut his holiday to Madrid short and returned to Israel on Tuesday evening amid rising tensions over the Temple Mount.

Lapid’s decision to take time off overseas was met with criticism as clashes between security forces and Palestinian rioters in the capital have drawn international condemnations of Israel, primarily from Jordan and Turkey.

“This morning, I held a situation evaluation meeting,” Lapid said in a statement, noting that he was updated about the latest intelligence and political developments regarding Jerusalem.

“I’ve instructed participants to continue with dialogue at all political ranks to de-escalate the tensions and emphasise Israel’s efforts to allow freedom of worship for all religions,” he said.

The United Arab Emirates summoned Israel’s ambassador to Abu Dhabi on Tuesday over the escalations, in what was the first such public rebuke since the two countries normalised relations a year and a half ago.

During the meeting, UAE Minister of State for International Cooperation Reem bint Ibrahim Al Hashemy informed ambassador Amir Hayek of Abu Dhabi’s “strong protest and denunciation of the events taking place in Jerusalem and [in] Al-Aqsa Mosque, including attacks on civilians and incursions into holy places that resulted in the injury of a number of civilians”, according to the official Emirati WAM news agency.

Two Emirati airlines have also announced that they are cancelling their participation in an upcoming Israel Independence Day flyover amid the ongoing tensions.

In light of the escalation, a plan was leaked to a number of Hebrew media outlets on Tuesday evening for Israeli Police to bar non-Muslims from visiting the Temple Mount and the Al-Aqsa Mosque compound from this Friday until the end of the Muslim holy month of Ramadan on May 2.

The leaking sparked immediate outcry from right-wing lawmakers and pundits, who blasted the government for “caving to terror” following the clashes between Palestinians and Israeli police.

Tensions between Israel and the Palestinians have spiked during Ramadan, which happens most years, as tens of thousands of worshippers, including many from the West Bank, attend prayers at the Al-Aqsa Mosque.

Last Friday, those tensions boiled over after young Palestinians stockpiled rocks and other weapons inside the mosque and marched in the area, with some people carrying the green banners of the Hamas terror group. More than 150 were injured while 400 were arrested.

The marchers threw stones and set off fireworks, while stockpiling rocks and other objects to prepare for further clashes, according to police.

Police said they waited for morning prayers to end before entering the Temple Mount to disperse the rioters, and that some of them threw stones at the Western Wall below.

According to police, some Palestinians barricaded themselves inside the Al-Aqsa Mosque, from where they hurled stones toward officers. The police statement said the rioting was preventing prayers at the mosque and “thus harming a large number of Muslims” seeking to worship there.

The Hamas terror group said in a statement that Israel would bear the consequences of its “brutal assaults”.

“Our people in Jerusalem are not alone in the battle for Al-Aqsa. The whole Palestinian people and its noble resistance and its vital power are with them,” said Hamas spokesperson Fawzi Barhum.

The unrest comes as a series of deadly terror attacks in Israel in recent weeks has killed 14 and left Israel reeling. The attacks have prompted countermeasures from Israeli security forces across the West Bank, including arrests that have spilled into violence.