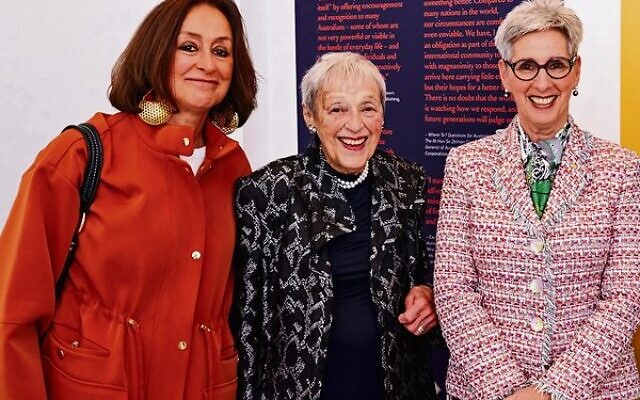 From left: Kate Cowen, Lady Anna Cowen, and Governor of Victoria Linda Dessau at the Jewish Museum of Australia in 2019. Photo: Dean Schmideg

KATE Cowen, daughter of the late Sir Zelman and Lady Anna Cowen, had a front-row seat to royalty in the years that Sir Zelman was the Queen’s representative in Australia from 1977 to 1982.

Kate was 18 and on a study holiday in Israel when Sir Zelman was privately informed of his appointment as governor-general in 1977. The news was kept from Kate until the official announcement, for fear it would leak, she recalled.

Speaking to The AJN this week, Kate harked back to a close encounter with Prince Charles (now King Charles III) during a visit by the Prince to Australia in 1979. She found herself sitting next to him at an official barbecue.

“I was absolutely starstruck at 19. He mentioned that he liked Barry Humphries and I’d just seen Humphries recently, so I launched into one of his routines.”

In her nervous encounter with the prince, Kate had forgotten that this particular anecdote from the legendary Australian raconteur “had an off-colour ending”, she said.

“I kind of froze in my tracks. He said ‘go on, go on, tell me, what’s the ending?’ so I told him – and he roared with laughter. Subsequently, I remember sending him a Barry Humphries coffee-table book, and he sent back a very nice note through his private secretary, stating ‘Please tell Miss Cowen [the book is] most amusing’.”

She still has the Prince’s note.

On one occasion during Sir Zelman’s term of office, Kate’s maternal grandmother Dora Wittner stayed in the royal suite at Government House, Yarralumla, in Canberra, but complained afterwards that the bed was quite hard. The Queen had stayed in that suite and had not complained about the bed.

“It took a Jewish grandma to tell us,” mused Kate.

In Lady Cowen’s anecdote in My Vice-Regal Life, her memoir on her years at Yarralumla, Kate said her mother had chronicled a visit by the Queen in 1980 for the opening of the new High Court of Australia building.

“The speeches are not enlivening,” Lady Cowen had written, “and the Queen wears a rather grim expression.”

On Queen Elizabeth II’s passing, Kate reflected, “I felt saddened. There were personal parallels with my mother [who passed away this year].” The Queen “was a person of great dignity and she had an extraordinary work ethic … she maintained an institution with great grace and care”.

Her brother, Rabbi Shimon Cowen reflected, “Only recently I saw the English journalist, Melanie Phillips’ comment about the Queen that she was the ‘mirror’ of the British nation. My father used to say similarly that he saw his own task in the Governor-Generalship as ‘representing the nation to itself’.

“What I think this means is that the true task – and accomplishment – of a great leader, particularly a titular symbolic one, is that he or she is one with whom everyone can identify.

“This is because this leader epitomises an ideal of ethical character, with national flavour, which all recognise.

“I think my father would have said that the Queen achieved this in high degree.”